Hello! I’m starting a concept series based on Final Fantasy 7 (or just FF in general) since I just started playing the remake on my PS4. So, of course to start off, here’s Cloud! 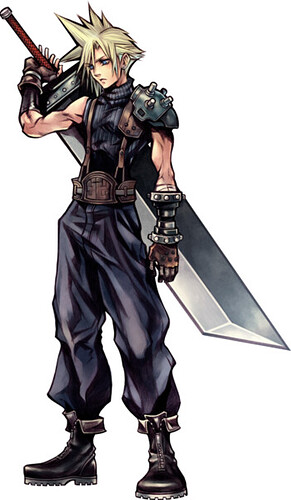 As a former member of an elite paramilitary group called SOLDIER, Cloud Strife will brew a storm (albeit not literally) on the battlefield, ready to protect his team from dangers that ever pass him.

Passive: Cloud will start battle in Operator Mode. This stance allows Cloud to dodge 75% of the attacks and debuffs against him. When he uses “Limit Break” he will switch to Punisher Mode. This will lower his dodge chance to 25% and slow his movement speed by 20%, but increase his basic damage by 150% and increase his Normal and Fantastic Crit by 100%. When he uses “Limit Break” again he will switch back to Operator Mode.

Active: Cloud’s Limit will be broken and he will preform a cross-slash that carves an ominous symbol onto the closest enemy, dealing Y damage per slash. The last slash will deal twice the damage of the other two. After this, Cloud will switch stances.

Cloud lunges towards the Most Wanted enemy with a piercing strike, dealing X damage and stuns them for 10 seconds. While the enemy is stunned they receive 5 stacks of Weakness.

Cloud can target invisible enemies with this skill and the stun cannot be dodged or evaded. Applying stacks of Weakness has a chance to fail against enemies above level Z.

Cloud will slash three select enemies in a quick succession, dealing X damage per slash and bonus damage equal to a critical strike. Each slash deals 50% more damage with each blow.

The enemies that Cloud targets with this skill are the enemy with the Most HP, then with the Most Skill Power, and then the Most Wanted enemy in that order.

Every 5 times Cloud dodges an attack, he will retaliate with a powerful attack at the enemy who attempted to attack him, dealing Y damage and stuns them for 7 seconds.

Cloud will prefer to target stunned enemies with his skills and will deal 50% of the damage as splash damage to nearby enemies.

When Cloud falls below 50% of his Max HP, his attack speed will increase by 150%, increase his armor and reality by 100%, and become energized for the rest of the wave. When Cloud is energized by this skill he gains 100 extra energy per basic attack.

Cloud-Captain Amelia
First Class Pass
Boost Team Stuns
+Z Max HP to Cloud and Frontline Allies
+Z Basic Damage for the rest of the wave whenever an enemy is stunned.

The game is amazing! I main Cloud in SSBU. Great concept!