Happy Halloween! Enjoy this concept feature the owner or the spider manor! 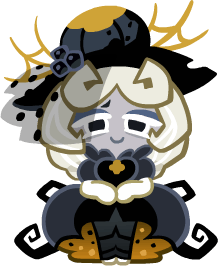 “There is no need to fear spiders.”

White Skill: Caught In A Web (Fantastic Damage)
Truffle Cookie summons some spiders that will spin spider silk around the two front most enemies, dealing X damage, stunning and sapping them for 7 seconds. The enemies are then knocked all the way to the back, dealing X damage to enemies that they pass through.

The enemies that are wrapped in spider silk will not receive any buffs or healing over time, and the stun’s duration cannot be reduced by tenacity and cannot be dodged or evaded.

Green Skill: Silky Rampage (Fantastic Damage)
At the beginning of each wave, the giant spider that carries Truffle Cookie will run off to the other side, dealing X damage to all enemies and slowing their attack and movement speed by 40% for 6 seconds.

Blue Skill: Antiques and Oddities
Two more spiders from “Caught In A Web” will carry antiques to give to allies. Each antique will grant allies X armor and Z skill power.

Purple Skill: Spider Seamstress (Fantastic Damage)
Every 3 Basic Attacks, the spider that Truffle summons will instead wrap the target in spider silk, dealing X damage, stunning and sapping them for 5 seconds.

Truffle also gains all energy that is blocked by Saps. This includes saps from allies.

Gaining energy from saps have a chance to fail if the sap came from allies or enemies above level Z.

Enemies that are sapped have a 30% chance to fail at using their active ability while still having all their energy consumed.

Enemies failing at using their active ability has a chance to fail against enemies above level Z.

Would love to hear your feedback!