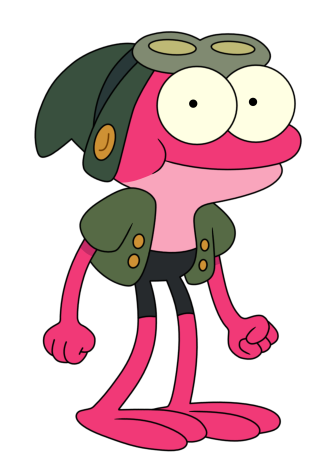 Entrance: Sprig hops onto his position, and then pulls out his slingshot.
Victory: Sprig jumps happily.
Defeat: Sprig takes down his hat and sobs.

Quote: ‘‘What? Does this look like a face that could deceive you?’’

Basic attack: Sprig slingshots a ball made of mud at the nearest enemy.

White Skill: Frog Music
Sprig plays on his fiddle, this converts all active debuffs on himself and his allies to buffs of the same type with same values and duration. Sprig and allies additionally heal X HP and become invincible for 5 seconds.

Sprig hits the nearest enemy with his tongue, dealing X Normal damage to that enemy and any others near them. Enemies hit also are knocked back, Snared for 12 seconds, and Discharged for 10 seconds.

Discharged enemies lose 80 energy when they basic attack. When Discharged is applied it removes all active Energized buffs from enemies and vice-versa.

Sprig slingshots few boom shrooms at enemies, all enemies take X Fantastic Damage while being Stunned and Sapped for 8 seconds and lose X Armor and X Reality for 12 seconds.
If the enemy hit was already Sapped, their duration of Sap is increased by 10 seconds and takes bonus X True Damage.

For each enemy losing more than 20% of their Max HP, Sprig and allies receive 150 energy.

Purple Skill: Hopping Into Action
Sprig now cleanses all debuffs which aren’t convertible with ‘‘Frog Music’’ from himself and his allies. For each debuff cleansed this way Sprig and allies heal 10% of their Max HP and gain 50 energy.

Red Skill: Froggy Optimism
Sprig is now immune to all debuffs and gains 35 energy whenever he blocks a debuff.
Energy received from “Tongue Slap”, “Boom Shrooms”, and “Hopping Into Action” is increased by 50%.

Discharged enemies lose 80 energy when they basic attack. When Discharged is applied it removes all active Energized buffs from enemies and vice-versa.

Kermit - New Frog on the Show!

This is a great concept.