These are my three teams, in fact the third one isn’t exactly a team, it used to be a scare team, but it wasnt working so I have been substituting the heroes, so far I changed two for maximus and basil, but now I dont know who to choose next, any advice, please?? 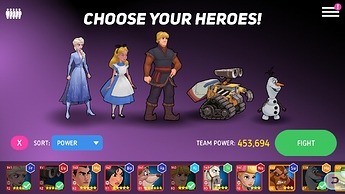 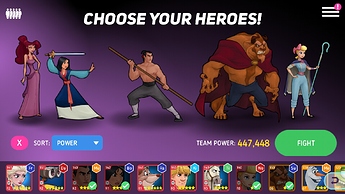 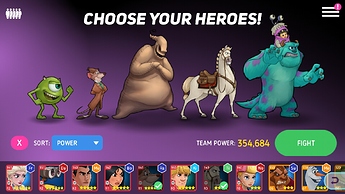 And about my first two teams, is there any change I should make for them to get better??

These are my heroes I have most powered up 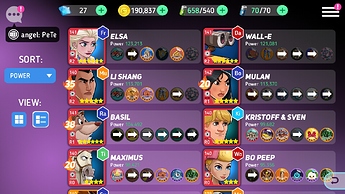 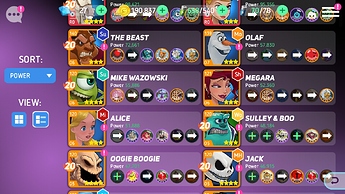 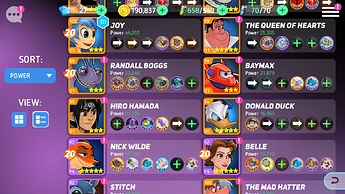 All and any advice is appreciated!

Scare really isn’t a thing anymore, although LS&B may change that.

Barbossa (Ti), Pleakley, and a good support could be swapped in for Mike/Sulley/Oogie to make it a Study team. Alternatively, Skellington and LS&B could be switched with Max/Basil, but that could be more risky.

And about my first two teams, is there any change I should make for them to get better??

Team 1:
Get rid of Alice and WALL-E. I’ve been experimenting lately, and Frozone might be good here if you can bring his red up to the point where Frost doesn’t fail. Getting Olaf’s red skill would also be a good idea, the healing from it is quite powerful when leveled and can help to support your team. The other slot can depend on your need, but either a good support or someone to boost the team’s Skill Power would work.
Small tip, Sven counts as an extra ally for Nick, who can be pretty powerful with his red (35% SP share) and a good number of purple skill upgrades. I use mine religiously, and have dumped 120 extra purple levels on him over time.

Team 2:
Get rid of Bo. Beast can be kept since inexperienced players may stumble over him when he’s in your defense, but you may want to switch him out for offense.
Goofy’s Jesse disk, which grants up to +200% bonus damage to blinded enemies, can make Mulan’s already deadly active even more powerful. There are a number of heroes with blind synergy, including Ian, Jafar, Powerline, and H&D, you can choose whichever of them you like but Ian (Me) or Powerline (Go) would be my choices.

you can choose whichever of them you like but Ian (Me) or Powerline (Go) would be my choices.

But neither can be in the same team

If you want Ian’s Merlin disk to work at full capacity, you can’t use slowers, stunners, or freezers with him. A silencer would be the best ally for Ian by far. Maybe even Mad Hatter (Ra)…

If you want Ian’s Merlin disk to work at full capacity, you can’t use slowers, stunners, or freezers with him.

It’s just energy, it’s not near important enough to constrain the team. Besides, there’s already Meg and Shang for silencing, and he has Mulan to be the main offense.