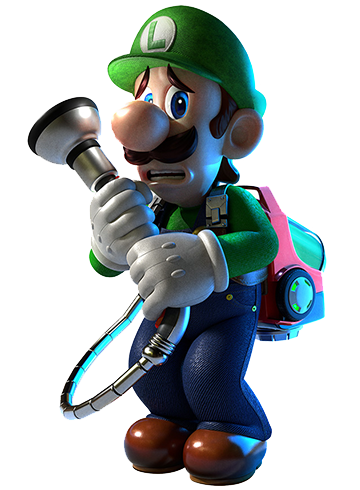 Description: Armed with his Poltergust G-00, Luigi is willing to fight against the creeps in the battlefield.

Basic Attack: Luigi uses his Poltergust G-00 to shoot a plunger at the enemy.

Victory: Luigi does a fist pump.

Defeat: Luigi get scared, putting his hands on his cheeks.

White Skill: Suck It Up

Normal Damage
Luigi turns on his Poltergust G-00, bringing the Most Wanted enemy closer to Luigi. This deals X damage and stun for X seconds to that enemy.

Fantastic Damage
Luigi exchanges his vacuum motor with a flashlight and shines it on the enemies, dealing X damage and blindness for X seconds to the surrounding enemies. Luigi will then switched back his flashlight to his vacuum motor.
(Minus the vacuum part in this gif)

Fantastic Damage
A ghost will suddenly appear in front of Luigi and Luigi catches that ghost and slams that ghost on the enemy’s side before fully sucking that ghost in Luigi’s Poltergust G-00, dealing knockback and X damage to the enemies. This will even stun enemies for X seconds.

Red Skill: Spooky Collection
“Flashlight Shot” and “Catch A Ghost” decreases enemies’ basic damage and skill power by X% for the rest of the wave. And “Suck It Up” removes X armor and X energy from the Most Wanted enemy.

Luigi/Jack Skellington
Meet With The King
“Catch A Ghost” Scares

Feedbacks and improvements are welcomed. I hope you liked it!

I think is too unbalanced this. I mean how often the “Most Wanted” can be Attacked by Luigi.

Wouldn’t be better the stunning condition or maybe every time the blue Skill damage the “Most Wanted” enemies. Like “Stunning Victory”?

I think he should have gooigi as a duo or at least a move.

I tried, but I already have other skills planned for Luigi.

What about an alternate concept with the same character but duoed with gooigi.link this one to that one