The Man Behind The Legendary Meme

SURPRISE! You got rick rolled! Hope y’all like it! 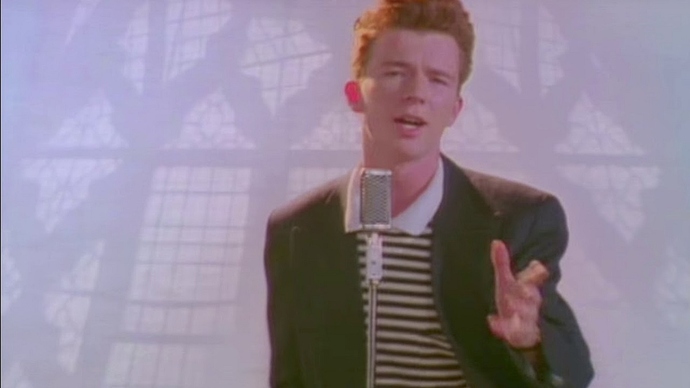 “We’re no strangers to love, You know the rules and so do I. A full commitment’s what I’m thinking of, You wouldn’t get this from any other guy!”

Rick Astley rick rolls the battle, supporting his allies by never giving them up.

White Skill: Never Gonna Give You Up
Rick puts on his song and dances, healing himself and allies X hp and granting the team X armor and reality for 12 seconds. If an enemy deals damage equal to 25% of their max HP or more to Rick or his allies during this skill, they are stunned for 5 seconds.

The armor and reality boosts resets between waves. The stun has a chance to fail against enemies above level X.

Green Skill: Let You Down (Fantastic Damage)
Rick lets the enemy with the most skill power down, dealing X damage, silencing them for 9 seconds, and reducing their reality by X.

Blue Skill: Gotta Make You Understand
At the beginning of each wave, Rick grants himself and his allies “Precise” for 6 seconds, and the strongest ally for 8 seconds. He also grants a shield that has X HP to allies.

Purple Skill: Charming Music
Allies receive 30% less damage from all sources while Rick is still in the fight.

Red Skill: You Know The Rules (Fantastic Damage)
While allies are being healed by “Never Gonna Give You Up”, they are cleansed of debuffs, their attack and movement speed are increased by 100% and every 3rd basic attacks deals an additional X damage.

When an enemy is damaged by “Let You Down”, nearby enemies are deal X damage and the current debuffs including the silence from the target are copied to nearby enemies.

Powerline (160)
Broken Records
Reduce Disables
+Reality
• Allies gain X% Tentiacy for every 5% HP they are missing.
• Allies heal X HP per second while disabled.
• Whenever an enemy disables an ally, their attack and movement speed is reduced by 50% for X seconds.

Are you kidding me!!!

Sorry everyone. If this does get flagged, I’ll change the title.

No it’s not it’s a concept

just change it now. It’s better than getting flagged

please don’t kill me over this

That name is better.

What was the name?

OH NOW I know who this guy is. That is hilarious. Great concept!

Me: rushes in as Kim was confirmed
You: get rickrolled
Me:

“Kim Possible Confirmed?” Was the original. I decided to change it.

because we were going to flag you

I already flagged him

edit : before he change the topic, sorry

Correct.
What would you rate it?

Now that is just unnecessary. They changed the title, and it is a great concept. You should not be mad about getting rick-rolled and flag them out of spite. They did change the name after all.

edit : before he change the topic, sorry