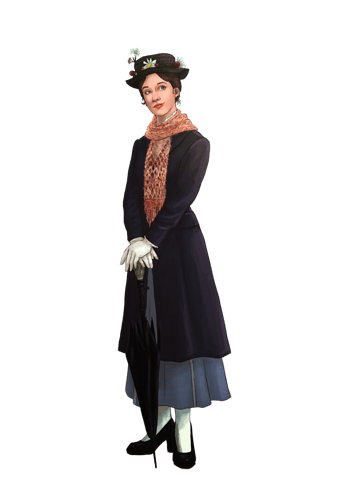 Entrance: Mary Poppins comes down into the battlefield with her umbrella. Then, she sets her bag on the ground

Victory: Mary Poppins will grab the front of her dress and kick her feet up in the air

Basic Attack: Mary Poppins hits an enemy with her umbrella, which is closed, dealing Y damage

Fantastic Damage
Mary Poppins sets her bag on the ground and snaps her fingers, opening up the bag. Then, a mirror, a plant in a pot, hatstand, a lamp, and a couple of lavender high-heels float out of the bag and then fly across the battlefield, dealing X damage to all enemies, pushing all of them back

Green Skill: You’re Not Sleepy
Whenever an ally reaches 30% of their Max HP, Mary Poppins grants that ally 50% attack speed and 50% movement speed for 8 seconds

The ally also regenerates X HP over time for 8 seconds

Blue Skill: Flying Flowers
Mary Poppins takes out a bouquet of flowers and sniffs the bouquet, turning all the flowers into butterflies that fly upwards, granting all allies X basic damage

Purple Skill: A Spoonful of Sugar
Mary Poppins applies a stack of “Hardy” to all allies whenever one of her allies has been dealt damage equal to 8% of their Max HP

Red Skill: A Bit of Tuppence
Mary Poppins grants all allies 50 energy whenever an ally heals themselves

Whenever an ally loses a stack of “Hardy”, that ally will gain 50 energy

Energy gain is reduced against allies above level Z

It’s New Years! I wonder who was the first baby born in 2020 though…

Where are the allies for Mary Poppin and Mad Hatter?

Hmm… they seem to have floated away