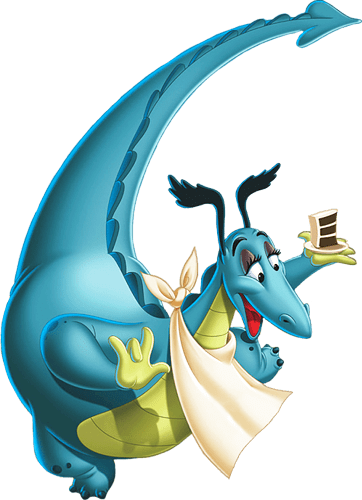 Although he may seem big and intimidating, this dragon is quite the bard. He shares his poems with his allies hoping to keep the mood up

“I promise not to rant or roar, and scourge the countryside anymore!”

Entrance: Walks in playing his flute

Defeat: Turns his back towards the enemy team

The Reluctant Dragon pulls out an upside-down cake and flips it several times, flipping all debuffs on his team to buffs and healing all allies with buffs for X HP

At the start of each wave, The Reluctant Dragon pours some tea for his team, healing himself and his allies for X HP over 8 seconds and increasing their Reality by Y.

Each time The Reluctant Dragon receives a debuff, he breathes fire at the enemy who gave him the debuff, dealing X Damage over 11 seconds.

The Reluctant Dragon can use this skill every 7 seconds.

At the beginning of each wave, The Reluctant Dragon applies “Poetic” to the front-most ally, including himself. Heroes applied with “Poetic” are healed for 50% more HP and block the first two debuffs applied to them.

Enemies with buffs damaged by Punk Poet are dealt an additional X damage and have their active buffs removed. The Reluctant Dragon and allies are immune to Damage Over Time skills during the first 7 seconds of each wave.

Where is he from?

Is that a short?

No. It’s a full length movie

Do you think it’s at Disney+?