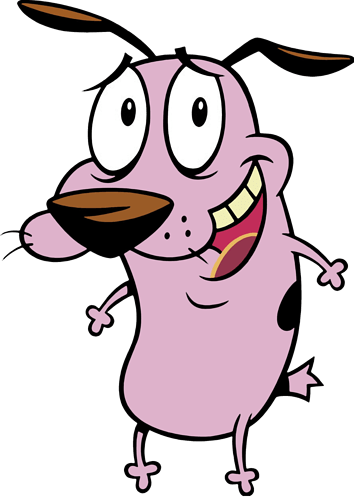 Victory: Courage Puts his thumb up and smiles.
Defeat:

White Skill: Scream!
Courage will yell, silencing an enemy for Y seconds, also dealing a small knockback to enemies close to him.

Green Skill: Computer Time.
Courage will sit down and type at the computer, studying an enemy for Y seconds.

Blue Skill: Don’t let your Guard Down.
When an ally is low on health, Courage will block them, giving them a shield for 5 seconds, until he runs back into place.

Purple Skill: Louder!!
Courage’s White Skill is able to go on for x2 longer, also giving more knockback to enemies close to him.

Red Skill: Guard Dog.
Courage can guard weak allies for 10 seconds now, also, whenever an enemy would attack Courage, they get a knockback, also having done X damage to the enemy.

Friendship 1: Courage and Beast.
Campaign Story: Don’t be so Scared “Beast is trying to help Courage not feel afraid anymore, but trouble comes.”
Disk: Courage Is Will.
Knockback will deal X damage to foes.

Friendship 2: Courage and Pooh.
Campaign Story: Animals help Each Other. “Pooh is trying to show Courage some of the things he has missed out on living in The Middle Of Nowhere, but some uninvited guests have come to crash it.”
Disk: Think What’s Gonna Happen.
Courage will get a shield for 5 seconds after he is done studying.

If you liked this, somehow, that’s good.