I’m not actually sure if some of his skills could actually work(his white skill to be more specific), so feedback is really appreciated! 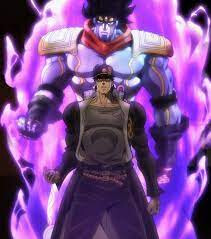 Jotaro is a 1 Star Frontline Damage Hero, whose Trial Team is Red.

The most famous Stardust Crusader is now here! Power, Speed and Precision: Jotaro’s Star Platinum has an abundance of this qualities, and will destroy his enemies before they are even able to notice!

“Your Stand gets to hide itself from the victim, the law, the consequences! That’s why… I shall be the one to judge you!”

Jotaro stops time and punches nearby enemies with Star Platinum 15 times, dealing Y damage per punch. The damage done by this skill cannot be dodged or reflected, and once Jotaro activates it, the damage is done instantly. If Jotaro lands a crit with this skill, the damage will be dealt as TRUE damage.

Jotaro extends Star Platinum’s finger, making it pass through the battlefield and deal Y damage to the enemies it passes. This attack deals Y extra TRUE damage if it lands a crit.

Mighty-Eyed Stand
Star Platinum observes the battlefield with his powerful eyes, studying all enemies for 10 seconds and granting “Precise” to himself for 10 seconds. Precise heroes can target invisible enemies and their attacks cannot miss or be evaded. While Precise, Jotaro gains X Basic Damage.

Arcana XVII: The Star
Jotaro gains Z Armor and Z Basic Damage everytime he lands a critical hit. If Jotaro K.Oes an enemy with a critical hit, he gains Invincible for 6 seconds.

Stardust Crusaders
Everytime Jotaro or his allies land a critical hit, they gain 1 Stack of Hardy.
Mighty-Eyed Stand can now grant “Precise” to all allies as well.
Jotaro and his allies gain Z Basic Damage While “Precise”

Is Charged In Battle When: Jotaro lands a crit 5 times

Jotaro Kujo + Maximus
Campaign: Tough Look: Maximus, while doing his patrol, spots Jotaro and thinks he is suspicious, so he decides to follow him. After he sees Jotaro littering a cigarrete, he is sure that Jotaro “is not a good person”.
Allies: Chief Bogo, Nick Wilde, Judy Hopps
Disk Name: Unpaid Fine
Effects: +Y Basic Damage
Stars: Studied enemies receive a 15%(+15% per star) armor debuff while studied. Studied enemies are Stunned for 8 seconds when they receive more than 80%(-15% Per star) of their Max HP as damage in one hit.

Jotaro Kujo + Donald Duck
Campaign: Hot Headed Duck: Jotaro and Donald accidentally bump into each other, and Donald gets really annoyed by this. He tries to pick a fight, but Jotaro just tries to ignore him.
Allies: Scrooge McDuck, Mickey, H&D&L.
Disk Name: Astronaut Duck
Effects: +Y Basic Damage to all Red Team Allies
Stars: Jotaro can Block a disable from a Studied enemy once every 8(-1 per star) Seconds. Everytime a disable is blocked by this Skill, Jotaro gains +50% Basic Damage.

Which Disk Would You Use?

Hi! Just here to give feedback!
I see, I see…
The white skill seems like a better version of Dash’s white, if you wanted to make something broken, congrats, you surpassed Dash.
I think it is a bit OP, like, if the damage was like most of the damage heroes in 2021 deal it would be tons + possible true damage? But, it could be less damage so that’s why it’s a variable and I could be wrong

Maximus friendship:
So, at 5* enemies would receive a 75% armor debuff while studied and stunned when they receive an attack that’s more than 20% of their max HP
I think in study teams + the precise from the red it could be OP. I mean, never fail an attack + receive 75% more damage from normal damage. I think you get what I mean.
Again, I’m not a professional in the game but I think he would fit perfectly in a study team he would make the team OP…
Good concept!

I know it has nothing to do with it but how do i send video to make my hero
Concept?

You mean a gif? You have to download the gif in your device(At least that’s how I do it) and click on the “picture” on the editing bar above the place you write the topics and click on the option “from my device”, and then you choose the gif you want to upload.