Don’t tell me that this character is banned, tq. “Tra-La-Laaaaaa!”
As Mr. Benjamin Krupp being a mean principal, by a snap, he turns into a wedgie fighting machine.

Entrance: Walks in as Mr. Krupp, then checks his mail and hears a snap, turning into Captain Underpants. See more on Blue Skill.
Trivia: this is how Mr. Krupp looks like Victory: He dances
Defeat: A sprinkler shoots him and goes back old mean Mr. Krupp.
Basic Attack: Throws a wedgie at a random enemy, dealing damage to them.

Captain Underpants gets a giant wedgie out of his underpants and wedgies the target enemy chosen by the player, if the battle is on auto, wedgies the enemy with the highest evasion. The enemy being wedgied cannot do any attack for 5 seconds, while an enemy is wedgied, he increases his armor and reality by X.

)
Punches a random enemy, dealing damage to them and gaining a shield that lasts 6 seconds, this skill cannot be used again until the shield wears off.

At the start of each wave, he turns back into Mr. Krupp, then scholds all enemies, dealing damage to all enemies, then turns into Captain Underpants.

Red Skill: To Save The Day
Whenever a shield is gained, increase his attack and speed for the rest of the battle and he does damage over time for 6 seconds for each attack he does until the shield is off.

Help me decide whats next

Vote ends in friday, concept in saturday, after this poll, the it’s Eclair Cookie and Tea Knight Cookie in CrK

And also my own original concept in dhbm

No one wants to request for thier own concept, huh

The one who voted the other option, tell me what concept you want me to make, tq. And also, private message

If you don’t know how to private message me, ( of course, most of you know how) for your information, this is how you message me 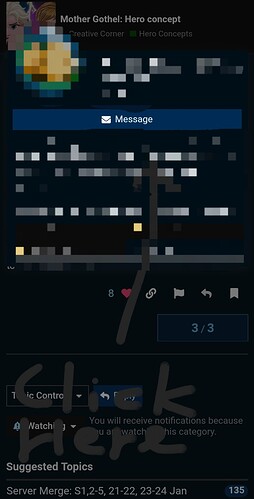 Or you can just request here