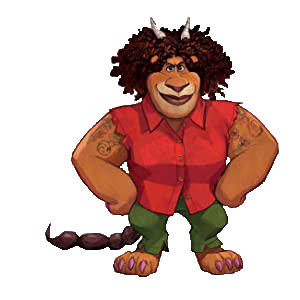 “Who said you had to take risks in life to have an adventure?!”

The Manticore is a front-line damage hero

Entrance: The Manticore descends into her position while flapping her wings

Victory: The Manticore roars in triumph

Fantastic Damage
The Manticore sticks the Curse Crusher into the ground and flies across the battlefield, dragging her sword through the ground, creating a cloud of dust along the way, dealing Y damage over time for 9 seconds to enemies she passes through.

Fantastic Damage
At the beginning of every wave, the Manticore applies “Venom” to the two enemies with the most max HP.

Fantastic Damage
The Manticore breathes some fire at the frontmost enemy, decreasing their reality by X and dealing X damage over time for 6 seconds.

If an ally is within range of her attacks, the Manticore may remove all of their debuffs.

This may fail against allies above level Z.

Red Skill: Adventurous Risks
The Manticore has a 60% chance to redirect attacks to herself, and gains 40% attack speed for the rest of the wave whenever she redirects an attack.

Enemies under the effects of “Venom” are stunned for 3 seconds every 14 seconds.

I still get confused by the real one. Great job on that

Should I keep on saying something here?

You know what to do

On a side note:

(Looking at you BC)

Nothing much to say. I love it

Give you a blanket*

This concept is awesome!

awesome. the Manticore is like one of my favorite Pixar characters

@Hallows-EVE who is this? You mean Candace?

From phineas and ferb

Looking Forward to it!

That’s something that you can find out on your own.

And when you do figure it out, don’t reveal your answer.