Yes Holes Is A Disney Movie I’m Not Kidding

“I’m not stupid, I know everyone thinks I am, I just don’t like answering stupid questions” 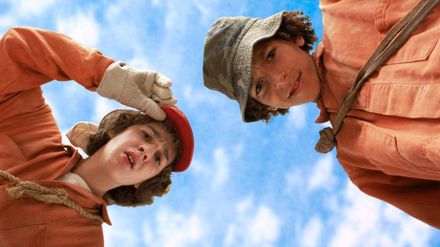 Entrance: They walk in and position themselves for the fight

Basic Attack: Zero hits the nearest enemy with his shovel

Victory: They do a bro hug smiling at each other

Defeat:Zero falls and Stanley looks nervous about him

White Skill:Digging Up Trouble: Normal Damage -Passive: Every basic attack made by Zero gives the two one stack of Dirt to themselves Dirt increases their active’s damage by x and debuff duration by 1 secondl They can have a max of 6 stacks of Dirt

Attacks do 10% more damage per stack of Weakness to enemies The Stun, Blind and Weakness has a chance to fail against enemies above level

The stun has a chance against enemies level x or higher

Purple Skill: It’s Destiny When Stanley and Zero Reach 0 hp they give their

Red Skill:Fill In The Rest Of The Holes Yourself.

Dig! also pierces the enemy it hits for 6 seconds The Weakness and Pierce have a chance to fail against enemies level x and above

Dig! silences the enemy it hits for 10 seconds

For a first concept, this is pretty solid overall. I do have a couple of questions.

Dirt increases their active’s damage by x and debuff duration

How much does each stack of Dirt increase the debuff duration by?

How long do the armor and attack & movement speed buffs last?

When Stanley and Zero Reach 0 hp they give their

How much of their skill power do they give to each ally? Does each ally get ALL of their Skill power, or is it divided evenly among them?

I assume you meant “Conservation”, not “Conversation”.

Also, Conservation values are listed as percentages, not straight numbers.

The formatting could also be improved quite a bit. Overall, however, this is pretty well done!

There Fix The Errors

Thanks For The Compliment!