Too high difficulty, too much damage

Hello.
Sorry devs, but you really have to work on this game because is unbalanced everywhere, and I’m not saying PvP, the PvE is also messed up.
The city watch is practically impossible at this point because I’m level 300 and while I could go into the area 5 easily before, I couldn’t even get pass the third area because my characters were literally deleted without chance of making them survive due to the enemies being insta-killers.
Invasion is so difficult at times, yeah, maybe only at beginning, but sometimes you have to use many buffs to get past the first levels.
Then the fact that you started creating characters with reflect. Not only that, some even have reflect as yellow skill! I’m not against the addition of that buff, but putting it to characters you need to take down fast isn’t even funny.
Then when an area is infected, the enemies are level 330 to say the least, making the player impossible to take them down in the majority of cases.

I’m not saying to make it very easy, but at least drop down a bit of difficulty in PvE because it’s turning impossible to even defeat the easiest level.
Hope you understand all of this and fix some levels and make it a bit less difficult for us.

I gave up playing City Watch because the enemy teams are now too powerful to battle.

FYI, those are PvP teams created by the players, so you know they are purposefully customized to bury your team into the ground.

This is why I maxed out Elsa for early freeze.

We’ve been working on the City Watch difficulty! I’ll pass this on to the team that’s working on it

I agree that some of the PVE content can at times be to hard, so for those who want to play with the characters they like characters wise I think they should be able to use them without fearing them being able to stand up to the characters from 2022/late 2021.

Curious though, what characters do you use Voleitor? :-).
I could try to give you some tips to help you if you are interested.

Surge is also tied to power via gold, so I’d expect Surge to continue being difficult.

My main team is: Goofy, Nick Wilde, Merida, Mickey and Minnie or Ian Lightfoot. They’re powerful, overall I got Nick very powerful with improvements and all

I think the lowest difficulty of City Watch needs to be limited so basic level characters can use to gain Collection points.
That is what I used to do before the enemies became too powerful to do so. 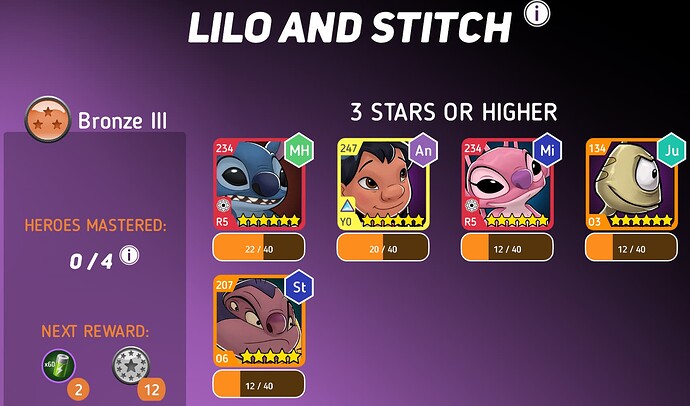 At only 1 point per day from Surge, this is taking far longer then I am comfortable with.

Do Invasion instead. You have unlimited breaker battles. If you’re really dedicated, you can knock out a collection in just a day or two.

Hint: use two or three powerful characters along with a few collection people so you can win the fights.

I tried invasion as an alternative.
Same problem, yellow enemies who KO the lesser characters in one round, two if they’re lucky.

But you can still win.

But then I revive them. And we fight the next breaker fight. The fact that these guys die does not stop us from making progress. Obviously, you can’t use a team where all five are Mickey’s friends because then you won’t win the fight. Use as many as you can to make progress in the collection and the rest of the team needs to be your powerhouse heroes.

I haven’t even spent much time on this collection but look how far I’ve gotten with this technique.

Just to prove a point, here’s what I did tonight. (The pics are in reverse order.)

I thought you could only revive defeated invasion characters once per day.
At least for free…….

No, you can do it many times a day

Defeating bots and breakers gives you revive items, well in excess of what you’ll actually require. It’s basically unlimited free revives. Just need a strong flamed hero or two to deal with actually beating the breakers, while racking up wins with the collection heroes: