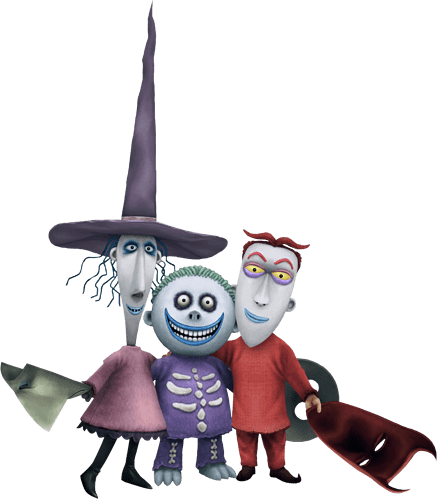 “Wouldn’t dream of it, Jack”

Entrance: The trio’s tub walks into the battlefield, carrying Lock, Shock, and Barrel. Then, the trio jump out of the tub

Victory: The trio throw their masks into the air

K.O.: Shock slaps Barrel with her mask, making him fall back

Basic Attack: Barrel licks on a lollipop and then throws it at an enemy, dealing Y damage

Fantastic Damage
Shock takes out a chest and opens it, letting out 3 scorpions. Each scorpion jumps at one of the 3 strongest enemies, dealing X damage per second and stunning them for 7 seconds to each affected enemy

Green Skill: Trick-or-Treat
The trio put on their masks, scaring all enemies for 14 seconds

Fantastic Damage
Shock takes out an axe, a spiked club, a sickle, and a spear, throwing them at the enemy with the most HP, dealing X damage per weapon, stunning them for 5 seconds

Fantastic Damage
At the beginning of every wave, the trio’s tub will run across the battlefield, dealing X damage to all enemies

Whenever an ally damages a scared enemy, that ally gains X skill power

So…what are you thinking of this? Creepy or wholesome?

I couldn’t think up of another name

I actually don’t mean to change the skill’s name. I’m just curious about the concept’s vibe, if you inteded to make it creepy or wholesome. Either way is good.

Any thoughts on this concept?

I hope they come to the game soon

I think it needs more scare synergy. Like mike, sulley, oogie, and Randall all have something in their purple skill that gives them some advantage over enemies who are scared. Not bad though.

Wouldn’t it make more sense for Lock, Shock and Barrel to stay in their tub for the remainder of the battle rather than getting out of it.