Two of the three.. (likely-ish concept) 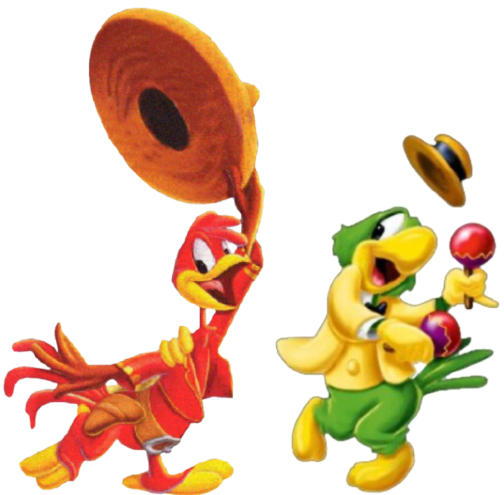 Panchito and José enter the battle, ready to charm all with their singing and dancing, but watch out, the aracuan bird might pop up!
Quote: “Que há de novo? Or, as you Americans say, What’s cooking?”

Basic attack: Panchito shoots his gun dealing x damage while José sings and heals the duo x
Entrance: Panchito walks in playing his guitar, when he reaches his position he throws it behind him, while José floats down to the ground with his umbrella.
Defeat: both smack their face
Victory: José starts singing and Panchito starts playing the guitar

normal
Panchito starts to sing and José dance healing them and all allies Y, after they heal all allies Panchito yells and stuns 3 of the weakest enemies and deals x damage Stun lasts 13 seconds

fantastic
The aracuan bird runs through the enemies dealing x damage to all creeps. Then 3 seconds after the bird leaves the screen he falls from the sky and screams, silencing all enemies for 13 seconds.

normal
Every time Panchito & José use their basic attack it deals x more damage than normal.

Purple skill: dancing dodge
For the first 10 seconds of each wave, Panchito and José Dodge all attacks and reverse all disables.

Red skill: saludos amigos
Every time Panchito and José stun enemies x damage is dealt along with it.

The first ally to be defeated is revived to full percent and deals x more damage than usual.

Stun has a chance to fail against level 235

No, Its from Ducktales.

Is it B.O.Y.D?
(Accidentally reply to a different forum user)

Who or what is BOYD?

B.O.Y.D (Be Only Yourself, Dude) is a robot created by Gyro Gearloose in the DuckTales 2017 reboot. The episode “Astro B.O.Y.D” is all about him.

Anyway, I’m not Grim but it is neither B.O.Y.D nor Blu.

Edited emoji(s) because I accidentally put the wrong one

Let’s see…a stick of dynamite…a desert and a fork and knife…Wile-E coyote??

Oh…question if I may, are you making separate concepts for them both or are you gonna find a way to put them together for a skillset?

put them together for a skillset?