Under the Mask... SEEKS REVENGE 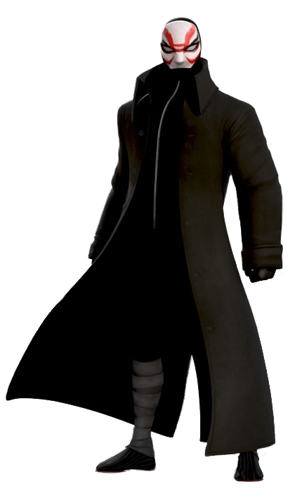 “We push the boundaries of robotics here”

Yokai is a mid-line control hero

Entrance: Yokai would enter the battlefield with his microbots all around his feet, moving him. Then the microbots would let Yokai walk onto the ground

Fantastic Damage
Yokai pummels an enemy with his microbots three times, each dealing X damage, stunning them for 7 seconds

Green Skill: Microshield
Yokai sets up a shield with his microbots, shielding himself for X damage for 8 seconds

Fantastic Damage
Yokai strikes all enemies from the ground with his microbots shaped like spikes, dealing X damage, decreasing the enemies’ armor by X

Red Skill: Magnetic Field
Whenever Yokai uses “Microshield”, he pulls the 3 frontmost enemies closer to him

The top three characters of this poll will be my heroes for the next concept:

This isn’t off topic

You know he got a name a a and it’s a guy’s name too it’s Robert, robert Callahan

Yokai is the name he uses as a villain. Here’s a link to a page that has a bunch of info about him.

He isn’t a monk. “Yokai”, in Japanese, is a term for a spirit, monster, or demon of Japanese folklore.

…
…
A GUY’S NAME?!!! You think I’m stupid? I’m practically a Disney expert (don’t know about Star Wars nor Marvel because they aren’t really under Disney’s name). CLEARLY this looks like a guy. Why’d you think i would think they had a woman’s name like “Chrysanthemum Stanton”?

Dang already Fa Mulan in the lead with 100%. Guess I should watch Mulan (not that I don’t remember her abilities)

Actually they are under Disneys name 100%. And nice topic

I meant there movies sorry for not making it clear

If Yokai were 2 make it into disney heroes, I would want Hiro with his super suit more than anything. But anyway, nice conept

Ok, technically it is off topic cuz it is not discussing Yokai in the least.

I was not under the inpression @Hades_IX was calling you stupid. I thought he was referencing that moment in mulan.

Shang: What’s your name?
Mulan: I have a name, and it’s a boys name to.
Shang: So what is it?
Mushu: How about Ling?
Mulan: His name is Ling.
Shang: I didnt ask for his name, I asked for yours!
Mushu: How about…ohhh…Ah Chu
Mulan: Ah chu?I
Shang: Ah Chu?
Mushu: Gesundheit, uh, I crack myself.
Mulan: Mushu…
Shang: Mushu?
Mulan: No!
Shang: Then what is it!!!
Mushu: Ping! Ping was my best friend growing up!!
Mulan: It’s Ping.
Shang: Ping?
Mushu: Although, Ping did take my–
Mulan: grabs Mushu around the mouth
Yes, my name is Ping.
Shang: Thanks to your new friend Ping here…

continued in the movie.

this evidence makes sense especially since they voted for Mulan too.

Did you seriously not get the reference mister big shot Disney fan?

I have seen a few times on these forums where he hasnt hated. This could be one of them

I do not care if acts like the king. He isnt my king so…

No. Oni is actually a Japanese folklore DEMON. Yokai ARE NOT oni, but oni ARE yokai

Been sick lately… so before Wednesday these concepts will be posted. The winners are Fa Mulan, Peter Pan, and a tie between Mushu and Dr. Facilier. I will make a final vote down below. Will close on Tuesday.

Was he going in Mulan or Mulan 2?I don’t know…