Merry Christmas Everybody! Enjoy this double concept as a nice little gift! 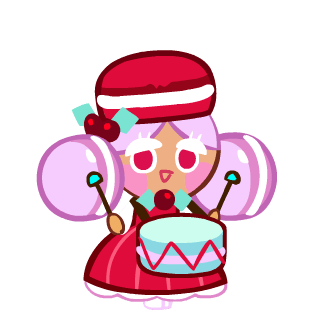 Everybody line up! The parade is about to start! Macaron Cookie starts up a parade to help allies keep up with the tempo.

White Skill: Animal Parade (Normal Damage)
Passive: Instead of dealing damage, Macaron calls in one of her macaron animals with each basic attack. Macaron Cookie can have a max of 7 at a time.

Active: Macaron begins the parade and the animals march through the enemies, dealing X damage per macaron. Allies gain 150% attack and movement speed and X basic damage per Macaron acclimated.

Castanets will appear once every 10 seconds and will still use this even if Macaron is frozen, stunned, or silenced.

Blue Skill: Stay In Line
Macaron encourages allies to stay in line, cleansing them off all debuffs and granting them 4 stacks of “Hardy”. Each stack of “Hardy” blocks one debuff from being applied and is then removed.

The Hardy buff has a chance to fail against enemies above level X.

Purple Skill: Light Steps
Macaron Cookie is immune to slows. Once every 12 seconds, if an Ally would be slowed, Macaron Cookie absorbs it instead and grants her ally X Skill Power.

Red Skill: Follow The Beat
For the first 10 seconds of each wave, Macaron Cookie and allies have their Attack Speed increased by 25%.

The additional Heal is less effective on allies above level X. 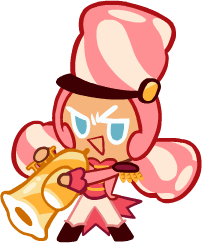 Role: Damage
Position: Front
Trial Team: Red
Entrance: Arrives into position and gets trumpet out
Victory: Poses and winks at the player
Defeat: Plays a poor note in shame, like Gonzo
Attack: Plays her trumpet and notes fly out and target the enemy

Marshmallow Cookie also grants herself and allies a shield with X HP that lasts 9 seconds.

Blue Skill: Sugar Shako
Once Marshmallow Cookie falls below 50% of her Max HP, she commands her allies to keep marching, granting them 300 energy and making them “Energized” for 10 seconds. Allies energized by this hero will gain 80 energy when they preform a basic attack.

The amount of energy granted is reduced on allies above level X.

Purple Skill: Mighty March
While parading with “Sugar Parade” the Sugar Guard transfers all debuffs on allies onto enemies damaged.

Red Skill: Keeping The Tempo
While allies are energized, their attack and movement speed is increased by 75% and their damage dealing skills will deal 75% more damage.

For each stack of “Hardy” removed, “Sugar Parade” will deal X more damage, up to a max of X. This buff is carried from wave to wave.

The bonus damage is reduced on allies above level X.

Marshmallow-Macaron
Very Merry March
Allies Gain Reflect When Threatened
+X Max HP to Marshmallow Cookie and Damage role allies
+X Armor to allies
• When an ally falls below 30% of their Max HP, they gain Reflect for 3 (+1 per star level) seconds. Heroes with Reflect prevent 100% of damage they would take and instead return that damage back at the enemy who dealt the damage. Reflected damage cannot be dodged. This triggers once per wave.
• Allies heal 15% (+15 per star level) of the reflected damage.

Feedback is appreciated! And also have a happy new year! (I hope.)

Just pushing this up so people can see!