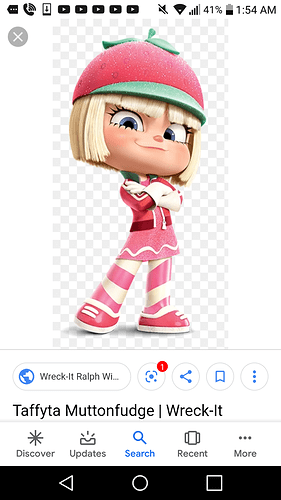 Screenshot_2019-04-26-01-54-36720×1280 326 KB
Taffeta Muttonfudge
Phrase: I told you, your just an accident waiting to happen!
Taffeta is a front-line support hero
Entrance: comes in with race car, hops out and the car glitches away
Basic attack: throws lollipop
White skill: Stay Sweet!
Taffeta jumps in the air and gives a burst of support (as she did in the movie when she was entered into the race in the first movie) by healing all allies for X hp
Green skill: Its so…you!
Taffeta makes fun of the closest enemy and slows the enemy’s attack speed by X
Blue skill: To protect us!
Taffeta gives everyone a sweet shield that heals them X hp and last 7 seconds
Purple skill: Good luck princesses!
Taffeta uses sarcasm on the closest opponent at the beginning of battle lowering their critical hit by X (if the enemy has less than X critical hit that amount of remaining critical hit will damage them)
Red skill: We’re like adorable!
When Taffeta uses her white skill she also blind all enemies for 7 seconds and charms the one with the highest team power for 15 seconds, this has a chance to fail if the enemy is higher than lvl X
Win animation: Taffeta puts a lollipop in her mouth crosses her arms and stares at the screen with a smirk
Loose animation: Taffeta starts crying 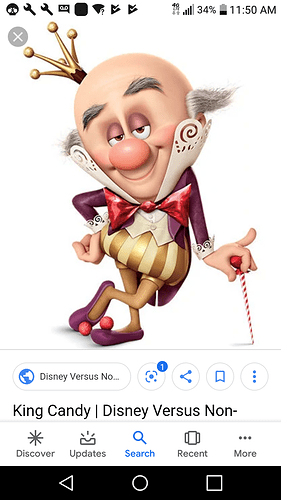 Entrance: Sour bill introduces king candy and king candy jumps out ready to battle as he’s introduced after that sour bill glitches away
Phrase: Milk My Duds!
Winning animation:king candy glitches into turbo with turbo car with and says the words: turbo-Tastic! In 8-bit form with a thumbs up
Loosing animation: King candy glitches into his cy-bug form, turns around and goes into the light, disintegrating
Basic attack: king candy takes candy out of his pocket and throws at the foes
White skill: It Hasn’t Been a Pleasure
king candy can instantly K.O. a player with his basic attack if the player is below X hp and stun enemy’s around the targeted foe
(The stun has a chance to fail against enemy higher than lvl X)
Green skill: He Just Glazed Me
king candy pulls out a frosting dispenser and shoots glaze at the closest enemy dealing X damage
Blue skill: Go! Leave Me
when one of king candy’s allies is K.O.'ed king candy pulls out their games source code and breaks an enemy’s code causing them to take X damage every 8.0 seconds for the rest of the battle or until King candy is K.Oed
Purple skill: U Hit a Guy WITH Glasses
for every time king candy takes X damage he will charm the last the last attacker
Red skill: The Race Roster
Whenever an ally uses their white skill king candy and the ally gain X hp
King Candy and the ally might not heal if the ally is above lvl X 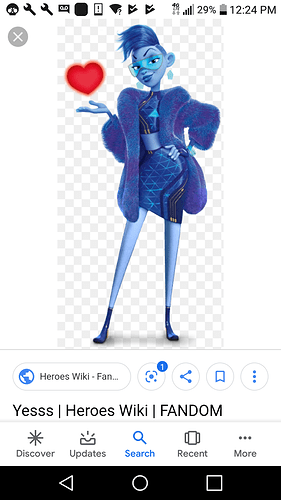 Screenshot_2019-07-05-12-24-55720×1280 288 KB
Yesss: is a back line control hero who uses popularity and hearts to attack she is an 2 star hero
Entracnce: Yess walks into battle looking at an i pad and swiping while shaking her head in disbelief, she then throws the tablet behind her in attempt to get ready to fight
Winning animation: paparazzi quickly come in to take pictures while yesss stikes a pose
Loosing animation: a color wheel pops in front of yessse’s face and yes looks at it with a surprised look on her face and fades away
Phrase: WEELL! why didn’t u tell me i was in the presence of a genius?!
Basic attack: Yess takes out a heart and breaks it in half and throws it at an enemy dealing X damage
White skill: Uninspiring!
Yesss crosses her arms and rolls her eyes and uses “Uninspiring” to slow all enemy’s attack speed by 30% This attack might have a chance to fail on enemy’s higher than lvl X)
Green skill: Al-Go-Rithm!
yesss re-ranges the enemy’s and on the screen by puling up the games code and swiping in all different directions this will slow and stun the enemy’s she moves and selects randomly
(The stun has a chance to fail against enemy’s higher than lvl X)
Blue skill: That’s Right u Big Baby!
Yesss charms the enemy with the lowest health by tossing them a heart the charm last 10.0 seconds
(Enemy’s over lvl X will not be charmed by yesss)
Purple skill: Thanks for Stopping by Though!
Yesss is immune to all debufs if the enemy’s that casted it are lower than lvl X
Red skill: A whole lot of hearts!
When an ally uses their special skill they gain Xhp every second by yesss. This last for 10.0 seconds 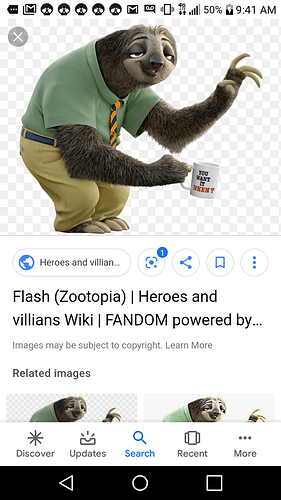 Screenshot_2019-07-10-09-41-47720×1280 462 KB
phrase: what…do…u call…a…three…humped…camel?
Flash is a 2 star front line tank hero
Entrance: Flash comes in sipping coffee from his mug very slowly
Winning animation: flash and percilia start dancing
Loosing animation: flash lies on the floor and takes a nap then fades away
Basic attack: scratches enemy’s with his nails
White skill: Just as well as i can
When one of Flashes allies is K.Oed, Flash heals himself and his allies for Xhp for five seconds
Green skill: Hey Percilia!
Flash calls in Percilia to help him fight Percilia does flashes basic attack (Percilia has X amount of health, Flash can not call in another Pecilia if the previous one is not K.O.'ed,)
Blue skill: Sure whats the plate number?
Flash throws a license plate at the furthest enemy dealing X damage and stunning ( the stun has a chance to fail against enemy’s higher than lvl X)
Purple skill: Flash, Flash, hundred yard dash!
Flash gains X attack speed for the rest of the wave if any character on the battlefield is K.O.'ed
Red Skill: Wanna hear a joke
When Flash is K.Oed he takes a quick nap that gives him 100% attack speed increases his health by Xhp and gives himself and percila a sheild (if shes there) that has 200hp and last for 30 seconds 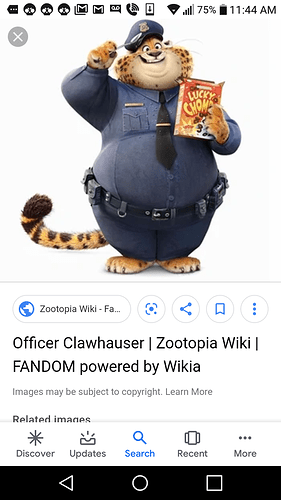 Screenshot_2019-07-17-11-44-55720×1280 365 KB
Clawhawser
Phrase: There you are you little dickens!
Officer Clawhawser is a front line damage hero who uses his snacks and phone to attack
Entrance: Clawhawser walks in drinking soda from a bottle, once her realizes that the soda’s gone he tosses it behind him and gets ready to fight!
Win animation: Clawhawuser pulls out a box of doughnuts and eats one savoring it.
Loose animation: Clawhauser pulls out a bowl of lucky chomps cereal and realizes after he takes a bite that the milk is spoiled so he spits it out and fades away
White skill: Awwwwww chief!
When an ally uses their white skill, Clawhauser’s energy will also fill as well! Clawhauser pulls out a phone and takes a picture at all enemies blinding them and dealing X damage the blindness has a chance to fail against enemies higher than lvl X
Green skill: Its Just a New app
Clawhuaser pulls out his phone and shows the closest villain his new app charming him for 10.0 seconds and taking X damage after the charm is over
Blue skill: Witnesses,None Leads,None
Clawhauser throws soda bottles at all Enemy’s taking away X energy and dealing X damage Clawhauser takes the energy and gives it to his allies
Purple skill: YIKES!
When one of clawhauser’s allies is ko’ed he grants all of his reaming allies 200% more speed (clawhauser can use this skill once per wave. Allies above lvl X will not gain a speed boost)
Red skill: Little dickens!
whenever Clawhawser uses his blue skill he gains
7 Likes
Hades_IX April 29, 2019, 9:19am #2

So you didn’t get venelope?

Yes i did but wouldnt it be realky cool to see her in game?

Why are you starting up a 3 month old tooic 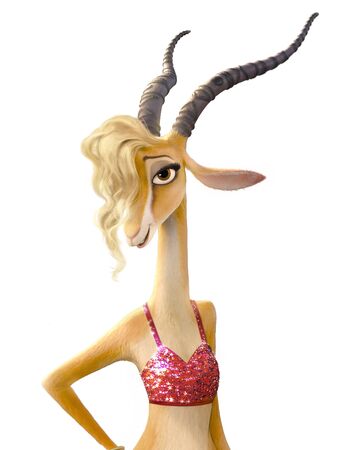 Gazelle
Phrase: I’m Gazelle. Welcome to Zootopia!
Gazelle is a mid-line support hero who uses her singing talent to support her allies!
Entrance: Gazelle waves goodbye to the off-screen paparazzi and walks into battle while doing so. While the paparazzi is not on screen, the flashing lights of pictures being taken are behind her when she enters battle and they slowly fade out as the battle is about to begin.
White skill: I love my fans!
Passive: Instead of a regular basic attack, Gazelle sings into her microphone healing herself
Active: Gazelle takes out one of her latest albums and signs it. After she signs the album she tosses it at the ally with the least amount of health, the ally is then granted a shield with X hp that last for 7 seconds. While the shield is active the ally will gain X hp every second
Green skill: Try everything
At the start of every wave gazelle sings heart-felt lyrics into the microphone. This effects the ally with the most hp and increases their attack speed by 70% for 15 seconds, this has a chance to fail on allies higher than lvl X
Blue skill: T.V. Interview
News reporters come in from the enemies side to interview Gazelle. while doing so they trample over enemies doing X damage and stunning them for 20 seconds. once the news reporters are done questioning Gazelle they leave in the opposite direction the came
Purple skill: Concert
every 5th time Gazelle uses her passive skill the healing is transferred to the weakest ally this has a chance to fail if the ally is above lvl X
Red skill: New Soundtrack
I love my fans also increases the allies attack speed by 200% this has a chance to fail against allies higher than lvl X 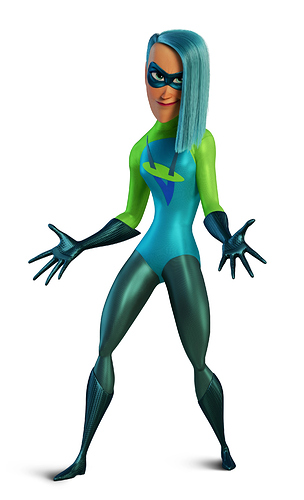 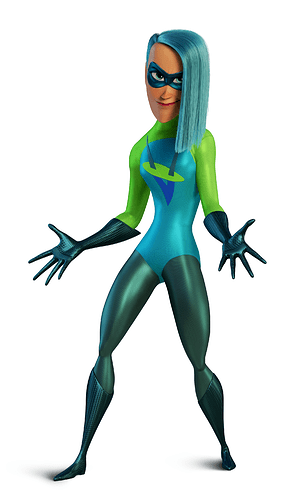 Voyd | The Incredibles Wiki | Fandom1829×3000 2.83 MB
Voyd
Phrase: Hi, My super hero name is Voyd!
Voyd uses her inter-dimensional portals to fight against enemies on the battle field!
Entrance: Voyd walks in juggling a coffee mug through her portals. she drops the mug on the floor by accident but has no time to clean up the mess so she instead gets ready for battle
White skill: Yay Me
Passive: For Voyd’s basic attack she makes a portal for herself telaporting her in front of all her allies, all enemy attacks will be cast upon her when she does this until she is K.O.ed. Voyd can only do this once per wave.
Active: Voyd cheers on and praises her whole team healing them for X hp and increasing their attack speed by 40%
Green skill: save yourself, make the shoot!
Voyd cast a portal below the closest enemy telaporting them behind all the other enemies dealing X damage and stunning them for 8 seconds
Blue skill: That was Incredible!
Voyd puts a portal under one of her allies telaporting them right back to where they were, cleansing them from all debufs and shielding them for 12 seconds with a shield that has 200hp
Purple skill: C’mon get yourself together Karen!
when an ally goes through Voyd’s portal they have a 20% chance to be stunned if the ally is stunned they enemy that attacked the ally last will be given all debufs that the ally was just cleansed from, their attack speed will be slowed by 20% and they will take X damage
Red skill: Super hero stuff
Every time voyd uses her green skill that enemy is charmed and gains 25% attack speed, this has a chance to fail against enemies higher than lvl X
Win: Voyd looks at her hands in disbelief that she won, and does a small exited jumps
Loose: Voyd waves goodbye and uses her portals to telaport herself off screen
PerBlue Entertainment | Terms of Use | Cookie Policy | © Disney