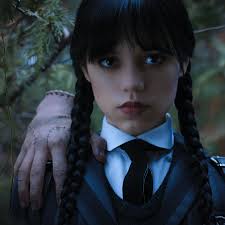 Description: This iconic duo is ready to bleed onto the battlefield. Hopefully someone will lose their head.

Quote: “I do like stabbing. The social part, not so much.”

Entrance: Wednesday lights up her way with a flashlight and walks onto battlefield, while Thing scurries on.

Defeat: Thing drops to the ground and Wednesday cries.

White skill: Cello Swirl
Wednesday brings out her cello and plays a monstrous musical number. This song charms and increases the move my and attack speed of all enemies by 100%. When Wednesday stops playing her song, all allies gain X skill power for 10 seconds.

Green Skill: Piranha Bites
Wednesday takes out two bags full of piranhas and throws them at the two front most enemies. Each bag deals X normal damage and snares each enemy for 7 seconds. If there is only one enemy left, two bags are thrown at that enemy.

Blue Skill: Gargoyle Rain
Wednesday takes out her umbrella and points it at the ally with the most HP. A gargoyle falls on top of them at ally, scaring and distracting them for X seconds. Each time this skill is used, another second of debuffs is gained. The first time Wednesday uses this skill the debuffs last for 3 seconds.

Red Skill: Don’t Blink
Wednesday and Thing now use “Gargoyle Rain” at the start of each wave. The enemy hit by the first use of “Gargoyle Rain” has all of their buffs removed.

Friendship #1: Wednesday and Thing and Sally

Wednesday and Sally search for the most poisonous plant needed for a secret potion, but it turns out the creeps have stole all the necessities.

Disk: Each time movement and attack speed is decreased for any ally, that/those allies gain reflect for X seconds.

+X reality to Wednesday and Thing

Friendship #2: Wednesday and Thing and Miguel

Friendship name: A Note of Difference

Wednesday and Thing and Miguel go around playing music for the world, however, Wednesdays music attracts a bunch of creeps.

Allies: The Mayor, Jessie, and Yax

+X% Reality for Wednesday and Thing

Thank you for reading this concept!! I am looking for feedback if you have any!!

Feel free to comment on anything that needs work or change.