Yet another Family Guy concept 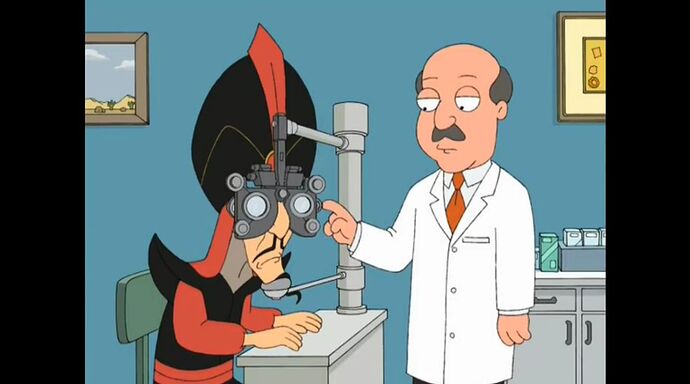 Quote: “They’re both the same. Number 1 might be a bit better.”
Role: Midline Tank (after all, what about if your opponent’s tem has mostly long-range units?)

Entrance: The Eye Doctor glitches into existence with his machine. Jafar then warps in for his appointment, which conveniently is in the middle of the battlefield.
Basic Attack: The Eye Doctor’s contraption fires a laser out of Jafar’s glasses.
Victory: Jafar teleports away while the Eye Doctor smiles at his teammates proudly.
Defeat: The machine explodes, launching Jafar and the doctor off-screen.

White Skill: Number One, Number Two…
Passive: Blind Jafar and Eye Doctor cannot be blinded.
Active: Jafar picks Number One, granting him, the doctor, and any teammates behind them a shield that lasts for L seconds.

Green Skill: Step Away from the Appointment
When Blind Jafar and Eye Doctor are attacked, Eye Doctor counters with a punch, dealing X normal damage. This skill has an L-second cooldown.

Blue Skill: 20/20 Vision
Blind Jafar and Eye Doctor’s basic attack now deals Fantastic damage, and can go through multiple enemies in one go. However, ot now has an L-second cooldown.

Purple Skill: Unusually Calm
Blind Jafar and Eye Doctor will now gain Reality Up when given a shield.