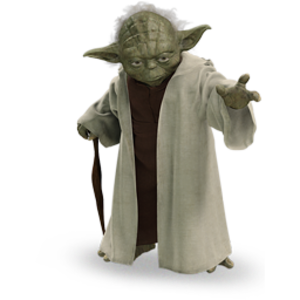 Grand Master Yoda uses his superior knowledge of the force to support his allies.

Basic Attack: Leaps at an enemy with his lightsaber
Entrance: Hobbles in with his walking stick
Victory: Does a flip in the air
Defeat: Lays on the ground and fades away

Fantastic Damage
Yoda absorbs a non-melee attack and releases it back at the enemy. This deals X damage plus 50% of the damage from the absorbed attack. The enemy is also knocked back.
Yoda can absorb a non-melee attack once every 9 seconds.

Normal Damage
Yoda leaps at the enemy with the most remaining HP and hits them with his lightsaber. Yoda steals X HP form the target and gives it to the ally with the least remaining HP.
If Yoda activates this skill while boosted from Presence he heals himself and all allies for 50% of the stolen HP.