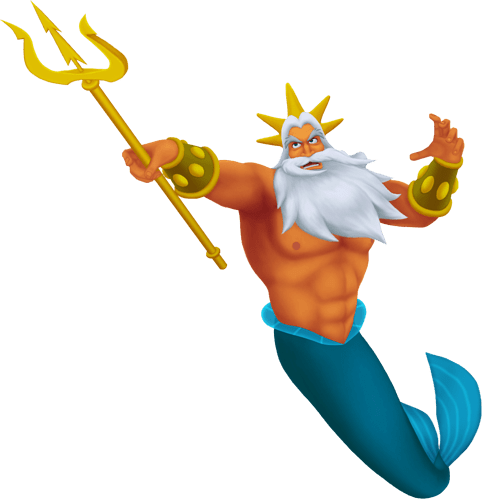 “I consider myself a reasonable merman… I set certain rules and I expect those rules to be obeyed!”

Entrance: king triton emerges from a body of water that appears in his position

Victory: king triton smiles while raising his triton in the air

Defeat: king triton gets angry as his triton loses power

King triton raises his triton as it glows brightly, increasing the duration of all buffs on allies by 4 seconds and blinding the two nearest enemies for 10 seconds, then in a rage, he zaps all enemies with a laser of energy, dealing X damage to all enemies and sapping all enemies for 5 seconds.

Sebastian appears and conducts a short melody with his baton, making the two frontmost allies invincible for 5 seconds and giving each ally 150 energy.

King triton slowly swipes his triton fowards which creates a rainbow that covers all allies, this cleanses all debuffs on each ally, heals each ally for X amount and increases the crit chance of each ally by 60%

If an ally has more than 3 buffs on them when this move activates, this move will instead make them invincible for 10 seconds.

Purple: ruler of the sea

All buffs on king triton increases the power dealt by “triton’s rage” by 25% for each buff on him.

All healing done by allies now increases the duration of any buff on them by 4 seconds.