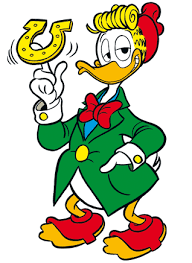 “When my public named me ‘lucky’ they weren’t just awoofin!”

Entrance:walks in until he sees a 20$ bill on the ground and picks it up

Victory:he straightens his suit as he smiles

Defeat:he drops his dollar as it floats away as he tries to grab it but he ends up faceplanting onto the ground

Basic attack:a anvil or safe falls onto a random enemy which damages that enemy for x amount and has a 30% chance to stun the enemy hit

Gladstone finds a lucky penny on the ground which increases his chance to dodge a attack by 50% as well as giving him a small attack power boost for 3 seconds.

Gladstone finds a 20 dollar bill in his wallet and smells it which heals him for x amount.

Gladstone is now immune to all forms of CC

Gladstone now gains a another 50% chance to dodge attacks when Donald duck is on the enemy team.

“20 dollars” now gives Gladstone armor when he is at full health.

Inspired by ideas from @Kira and @Grim_grinning_Ghost

Strange I just made a Gladstone concept

I don’t think it is a coincidence

Really. Is that a bad pun or something else.

This is literally my concept but he changed up like 13% of it, the other 87% was my work. And it was made on the same day I made mine. The attacks are almost identical, and if you look at mine you can clearly see that this was a ripoff.

C-Train said on Discord that they were inspired by Grim_Grinning_Ghost’s concept and the suggestions I suggested to Grim_Grinning_Ghost for them to get ideas on how to make their Gladstone concept more relevant in today’s meta :-).

C-Train’s concept is pretty good in my view mine and more meta friendly than my ideas, since the ideas I had were probably too strong or to say too good when all of them in the same concept even and more balanced when they are some of them and not all of them.

I have actually been kind of inspired and now can’t help thinking about new ideas for skills that could fit Gladstone now and then, but these ideas are for the most part different than from the ones you two have written and will only use my own ideas including those I originally suggested, even if some might have similar effects at times it can’t be helped when it is in terms of the same character.