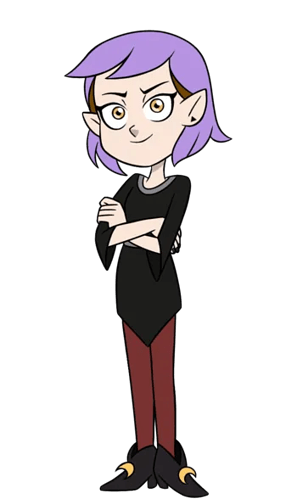 Entrance: Amity flies to her position on her staff.
Victory: Amity blushes and smiles.
Defeat: Amity gets very angry, her face turns red and after 3 seconds catches air.

Passive: Amity joins each battle with her Abomination, it has no base health and takes no damage and never receives any debuffs and cannot be knocked back, Abomination deals X True Damage to enemies with each of its basic attacks. The Abomination is only defeated when Amity is defeated.

Active: Amity gives an order to her Abomination to attack enemies, Abomination strikes the ground creating shockwaves which deal to all enemies X Fantastic Damage, knocking them back, removing all buffs, and stunning enemies for 6 seconds.

Amity creates a fireball which then flies through all enemies, dealing immediately X Fantastic Damage and a bonus X Fantastic Damage per second over 10 seconds. Enemies hit also receive 3 stacks of Weakness for 7 seconds and lose X Max HP for the remainder of the wave.

Amity creates a magic cage around the enemy with the most basic damage, locking them for 10 seconds, the target becomes stunned and loses all their buffs. While in the cage, the enemy can’t gain any buffs and energy. Amity can’t cast this skill twice on the same enemy if they are already caged.
Whenever a caged enemy is knocked back they take X Fantastic Damage.

The Stun from this skill cannot be Cleansed, avoided by Evasion, reduced by Tenacity, or Dodged.

Purple Skill: Spiked Fist
Amity now is a front-line hero and has her fist covered with abomination matter with spikes. Amity now deals melee damage and steals 15% of the enemy’s Armor and Reality for the remainder of the wave. Amity gains an extra X Max HP.

The Abomination now appears next to the middlemost enemy.

Amity can steal Armor and Reality up to 3 times per enemy.

Red Skill: Top Student
Amity and her Abomination have their Attack and Movement Speed increased by 100% for 9 seconds when ‘‘Abomination Control’’ is activated, Amity is also immune to Debuffs for the same 9 seconds.

Amity steals 70 energy from enemies she damages with her basic attacks.

‘‘Fireball’’ now knockback enemies and remove X Armor and X Reality for the remainder of the wave.

Great job, @Musketeer! I love all of the skills in this concept! But don’t you think the Abomination not receiving any damage, not getting knocked back or debuffed, and only dealing true damage is just a bit OP? Still, it’s great!

We really need some Owl House heroes especially since season 3 is starting. I only wish season 3 was on D+ (1 & 2 is there, but 3 is Disney TV only I think).

But don’t you think the Abomination not receiving any damage, not getting knocked back or debuffed, and only dealing true damage is just a bit OP?

Shields and Ariel can counter it.
And Abomination is suppose to be quite slow.

That’s cool. Are you gonna make one for Luz or did you do that already?

or did you do that already?

Role: Control Position: Mid Team: Red Entrance: Luz runs towards her position with sheets of paper and pencil in hand. Victory: Luz throws confetti around her. Defeat: Luz gets sad. Quote: “I was a nobody back home. But becoming a witch is my chance to be someone.’’ White skill: Light Orb Passive: Luz instead of basic attack draws on paper glyphs to use magic with her skills.…

For King and Eda too.