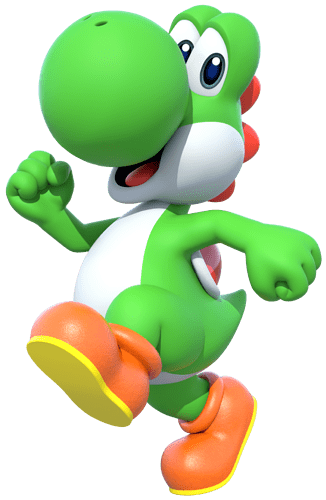 Entrance: a large egg appears in his position and it bursts open to reveal yoshi who then strikes a pose

Victory: yoshi punches the air twice before spinning and then standing on one foot

Defeat: yoshi spins around multiple times before falling to the ground chin first

Basic attack: yoshi kicks the enemy in front of him, dealing X damage

Yoshi hides himself inside of a large yoshi egg until either his energy runs out or his shield gets destroyed. while he is inside the egg, yoshi will be protected from debuffs, disables and knockbacks as well as gaining 25% armor every 5 seconds while inside the egg. However, yoshi cannot attack or use his other skills until the egg is gone.

When the egg is destroyed by an enemy, the enemy who dealt the final blow to the egg shield will have 3 stacks of fatigue inflicted onto them and will be knocked back as well.

Yoshi throws a small yoshi egg at the backmost enemy, dealing X damage to the foe, stunning them for 5 seconds and draining 30% energy from that enemy as well.

Yoshi dodges a close ranged attack and counters by unleashing a powerful combo of kicks to the enemy he dodges, this deals X damage per hit to the foe and the last kick knocks the foe back. yoshi can dodge a move every 5.5 seconds before it has to cooldown.

Yoshi gains X armor and X max HP for each 20% energy that is stolen from him.

“Egg shield” now deals X more damage to the enemy who gets targeted when the shield is broken, it also now gives nearby allies two stacks of hardy.

Each hit to the egg shield while yoshi is channeling “egg shield” now heals himself for X amount for each hit dealt.

When under 40% of his max health, yoshi gains X armor, X skill power and he now has a cooldown of either his green or blue skills depending on the one he used last.

Love it my favorite character