Anyone here have Disney+?

Is there anyone on this forum that has Disney+?

Please stop with all these topics…

We get it, you’re new and you want to talk but that doesn’t need to involve a bombardment of topics all complaining about the lack of support for Disney Afternoon mixed in with a bunch of random questions.

Do I need to edit out the complaining in the newest post? The last thing I want is for me to be reported to a staff member because I don’t know when to stop posting about there being a lack of support for The Disney Afternoon here. I also get it that people here are sick of seeing the posts and want me to quit sharing everything I’m thinking.

You know if you want to talk about this kind of stuff. I have Discord and me and you can talk about. Ok?

It told me the link is expired

Oops I didn’t know that. I will fix that

Could you please just edit the original comment instead of posting 3 times in a row?

I didn’t think about doing that.

A facepalm emoji would have worked better

I will say, even if Fellow_Hector_XLIII has posted a new post regularly there are no reason to actually be this hostile and unfriendly. Something to keep in mind.

And yeah, I do have Disney+ :-). (Even if I could have been better at using Disney+ more).

Me!
All good, but some content in UK is missing

a lack of support for The Disney Afternoon

And yeah, I do have Disney+

Not sure what’s the plot twist there ;^^.

But yeah, as far as far as the old Disney Afternoon cartoon as in these, the main issue is that younger people didn’t grew up with them and as such don’t have the same bond to them: 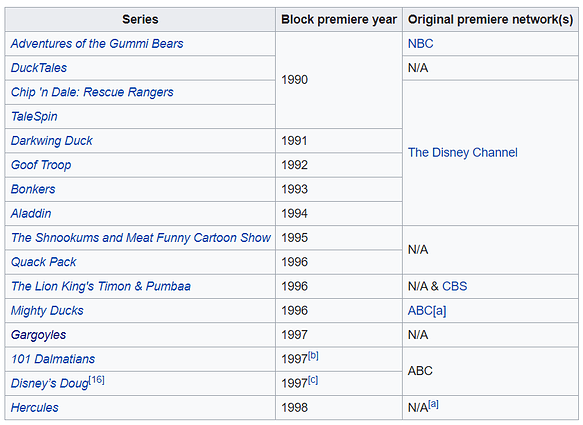 I think some of them may have been shown in the 2000s still and as such mid and late 1990, as well as early 2000s kids seeing at least some of them, however much past 2010 or at least 2015 is another thing.
I think the death of the regular old Disney Afternoon cartoons showing died with the shutdown of Toon Disney in 2009. Jetix was shutdown either at the same time or around the same time as Toon Disney, so yeah 2 really great and beloved channels were unfortunately lost in 2009.

So yeah, while some of the old Disney Afternoon shows might be on Disney+ that doesn’t mean younger people who didn’t grew up with them will seek them out. Some might, but the majority unfortunately likely not.

In the end, while the Disney Afternoon shows are likely supported by 30s-20s olds who grew up with them, but how many who are younger than 15/18 years old today will have grown up with them in some way?
That’s the issue there I think.

To this year some of Disney Afternoon was aired.

Now there is Disney+ and websites with cartoons.

but how many who are younger than 15/18 years old today will have grown up with them in some way?

My country at least haven’t least sent old Disney shows on the Disney channels as far as I have noticed.

While yes, but if they don’t know about them then they can’t really search them up either.

Can’t be helped if the old shows aren’t highlighted in some way to say.