Consider this my submission for @Rinoxeronte’s friendship contest!! I’ll do more in the future if this goes well!! Though Russell is finally in the game, I want to return to my original concept of Russell and delve into a friendship that I think would have been interesting than what we finally got. If Perblue does decide to add a third friendship to every character (which is very unlikely) this would be my choice for Russell. 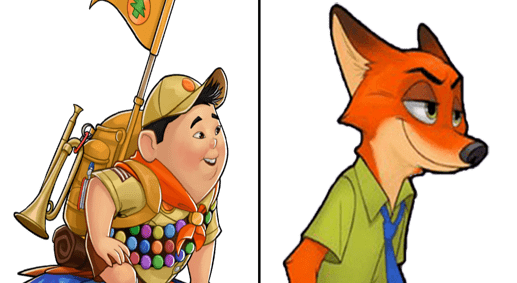 Nick: May I ask why you’re wondering the city with that colorful ostrich?

Russel: Oh, you mean Kevin? Don’t worry she’s not bothering anyone! And she’s not an ostrich, she’s a snipe.

Nick: Wait, you gave a female bird a male’s name? Nevermind… I’ve never heard of that species before… but it’s so colorful… She must be a joy to be around…

Russell: She sure is! This new city may be new for her, but whatever ground we walk on, the wilderness must be explored!!

Nick: Heh. Well, if you ever need my help, I’m Officer Wilde!

Judy: Nick! I just talked with a kid at the main hall with a scout uniform who lost a badge that’s very important to him.

Nick: Oh… What kind of badge?

Judy: I believe he told me the badge he was missing was his assisting the elderly badge… Listen, I got Parking duties today and I’m counting on you to help him out.

1-1: After hearing the briefing, Nick walks out of the office.
1-2: As he walks through the hallway, Nick is in deep thought about the whole situation.
1-3: Before he enters the main door entrance, he takes a deep breath…
1-4: As Nick Wilde opens the door, he sees Russell and Kevin in the main hall.
1-5: Nick can’t help but feel awkward around him…

Russell: Oh thank you so much for helping me sir, you don’t know how much this means to me right now…

Russell: I know the Iast place I had the badge, but me and Kevin can’t seem to find it…

Russell: Are you ok?

Nick: Yeah, I’m all good… so where did you think you last had it?

Russell: The last place I know I had it was in the park. I was there the whole time. We should head there now before someone steals it…

Nick: So, why is this badge so important to you?

Russell: It was given to me by my friend, Mr. Fredrickson.

Russell: He gave it to me on my inauguration day of me becoming a senior wilderness explorer. It’s a grape soda pin. To me, it represents a sense of bravery, loyalty, helpfulness, and–

Russell: Hey! How did you guess what I was going to say?

3-1: Nick and Russell enter the park with a metal detector.
3-2: Russell tells Kevin to have fun while they look for the badge.
3-3: The size of the park makes for a rather great majority of spots for the badge to be.
3-4: Nick asks Russell to retrace his steps to where he was in the park.
3-5: He says to ask as many people in the park as possible.

Nick: Try your best to retrace your steps the best as you can… It’ll be much easier that way…

Russell: Ugh… I was almost certain we were gonna find it… Oh well, now we know it’s not there…

Nick: (Nick stares at the pin, almost like he’s in a trance)

Russell: Officer Wilde? Is something the matter?

Nick: (To himself) My tribe number…

Russell: Maybe we should look around a little bit more…

5-1: Russell asks many around the park if they’ve seen a grape soda pin anywhere…
5-2: The citizens all say they haven’t seen it anywhere.
5-3: Russell not willing to give up yet, asks help in Nick, after all, he is a fox with a sharp nose…
5-4: Nick seems to be rather quiet and shaken up… he seems rather unresponsive at the moment
5-5: Russell wants to find out why he’s acting like this…

Russell: Officer, you’ve been acting weird ever since we found that pin with the number. If you want to tell me what’s going on, you can…

Nick: It’s nothing kid. I was just… feeling a sense of deja vu. Like my past has come back to haunt me…

Russell: Did something happen that I should know about?

Nick: (Sighs) Let me tell you a story kid…

6-1: Nick explains to Russell that he was just like him back in the day.
6-2: He tells Russell how he wanted to be an aspiring ranger scout back in his youth.
6-3: On the day of his initiation, he was jumped on by his fellow members for being a predator…
6-4: The event scarred him for life from that day forward on.
6-5: Nick sheds a tear as Russell looks at him with sorrow.

Nick: (Lets out a soft chuckle while tearing up) I don’t think I ever showed my emotions to anyone other than my parents or my partner Carrots…

Russell: No, it’s ok, I totally get it… sometimes, you just need to let out your feelings…

Nick: I need you to promise me something for me. Don’t let anyone get to your head. You’re a special kid with a great gift. As my city’s saying goes: Anyone can be Anything. From a fellow scout member to another, always remember to be who you want to be.

Russell: That sounds like something my dad would say… Thanks officer…

Nick: You know, talking with you made me feel so much better! Let’s go find your badge!

Nick: Now that’s what I call a hiding spot!

Russell: She must have rolled onto it while she was playing! Nice going Kevin!

Nick: Well, it’s almost nighttime and I’m exhausted. I should bring you back home…

Russell: You want a ride on Kevin?

Nick: I think I did enough walking for today… why not!

8-1: Nick jumps on Kevin’s back while Kevin cries in the night.
8-2: As they enter the streets, Kevin jumps on a street post and flings Russell and Nick up in the air. Russell is over ecstatic while Nick is scared for his life but overly hyped…
8-3: Kevin runs atop the rooftops and Nick, having the time of his life lets out a long “woo-hoo!!” in the night sky.
8-4: Russell points to his house down in the streets and Nick tells Kevin to go down to the house.
8-5: Kevin flips down from the girders and lands on the ground next to Russell’s house.

Nick: I’ve never had this much fun before in my life… we should do this again!!

Russell: Well, you know where I am now… say if you want to be a ranger scout, I heard there was an opening for a role as a counselor in my tribe.

Nick: You mean it? Well, if my schedule doesn’t interfere with my civil duties, I think I could make an exception!

Russell: That sounds great! Thank you so much for helping me find my badge!

Nick: No. Thank you for helping me find a part of myself again… I’ll never forget this moment ever again…

Make sure you link this campaign to the submissions thread to have it count for the contest!

Where is the submissions thread located?