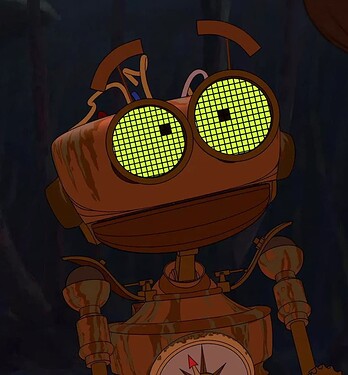 Animations:
Entrance: B.E.N. crashes into the battlefield from zero gravity.
Victory: B.E.N. leaps excitedly.
KO: B.E.N. gasps in horror, falls to his knees, and rolls away.

Green Skill - Gravity Change
B.E.N. tampers with the ship’s gravity wires, causing both allies and enemies to float in midair. Three random allies and three random enemies will all be stunned for 7 seconds.

Blue Skill - Lead the Way
B.E.N. opens a gateway to another galaxy with the map, dealing X damage to and removing X energy from enemies with pieces of gold being blown out of the gateway.

Purple Skill - Time Bomb
If at least one enemy has not reached 0HP by the time the battle timer reaches 45 seconds, B.E.N. will steal X HP from the weakest enemy and grant his allies X additional Skill Power each time that enemy takes damage.

This skill can only be performed once per wave.

B.E.N. + Hiro Hamada
Campaign: Files Folder - B.E.N. still has trouble with his memory after his journey to and from Treasure Planet. With help from Hiro Hamada’s robotics skills, he has his memory restored almost completely, tracing back memories of his life before joining Captain Flint’s crew.
Disk: Like It Was Yesterday
Disk Memory: B.E.N. “Lead the Way” skill deals X additional damage to enemies.
Disk Power: Z armor
Allies: Calhoun, Tigger, Maui