Back in order (Unlikely Concept) 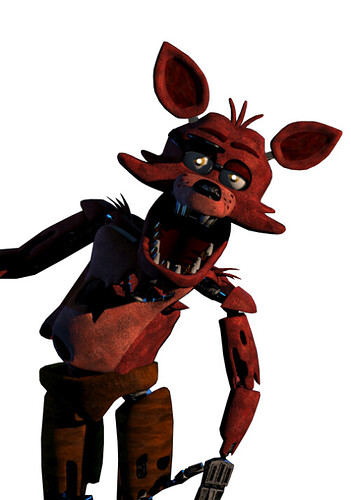 “Never underestimate the cunning of a pirate…or a fox for that matter!”

foxy may seem out of order but once he escapes his pirate cove…you better hope that your not in his rushing path.

Entrance: Foxy slowly peeks out of his pirate cove and then slowly walks onto the battlefield while staring at the enemy team with his mouth open (Until B0)

Victory: Foxy raises his hook into the air and laughs

Defeat: Foxy falls apart with his head facing the camera

Foxy leans fowards and screeches at the enemy team, dealing X damage to each enemy and scaring each enemy for 5 seconds.

If any enemy is already scared when he activates this move, they are dealt an extra X damage.

Foxy takes a step back and then lunges at the nearest enemy to bite them, dealing X damage to the enemy, knocking the enemy back and scaring the enemy for 4 seconds.

At the start of every wave, foxy hides in his pirates cove for 4 seconds which prevents 40% of damage dealt to him from damaging him until he emerges from the cove which then increases his attack and movement speeds by 100% for 5 seconds.

Foxy gains precise at the start of every wave once he leaves his pirates cove.

All scares dealt by foxy or his allies now lowers the skill levels of each target enemy by 20 levels.

Whenever Foxy is blinded by any source, his attack and movement speeds are increased by 30%