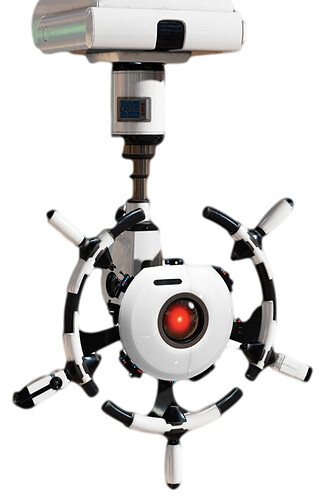 AUTO follows his directive by maintaining control in the battlefield

Entrance: AUTO appears deactivated above his position connected to a beam, he then activates himself (he won’t be able to move from this position)

Passive: at the start of each wave, AUTO marks the ally with the most HP as the “Captain”, the ally who is the “Captain” has 45% of the damage dealt to them instead dealt to AUTO while also healing them for X amount every 5 seconds.

Active: AUTO spins his wheel which somehow tilts the battlefield to the right, knocking back all enemies, stunning all enemies for 10 seconds and giving the two frontmost allies shields for X amount for 10 seconds.

AUTO sends out a SECUR-T to deal with the enemy team every 10 seconds, the SECUR-T attacks by trapping the closet enemy in its tractor beam for 10 seconds before it then slams the enemy into the ground and then goes through the rest of the enemy team, dealing X damage to each enemy.

While the enemy is trapped, they take X continuous damage per second and are prevented from attacking until the trapping wears off.

Whenever the ally that has been made the “Captain” by AUTO gets ko’ed in battle, AUTO and his allies become energized for the rest of the wave and AUTO stuns the enemy who ko’ed the “captain” for 10 seconds.

If the “Energized” ally is the “Captain”, that ally will now be cleansed of all debuffs/disables and will be granted a shield for X amount for 10 seconds

Whenever the ally that has been made the “Captain” gains more than 25% energy, AUTO gains “Energized” for 15 seconds and becomes invincible for 10 seconds.

“SECUR-T” now steals all buffs from the enemy that the SECUR-T traps and gives them randomly to AUTO and the “Captain” ally with their durations refreshed.
+X damage to basic attack
+X skill power
+X armor

All disables inflicted onto enemies decreases energy they gained by 35%

Whenever an enemy attempts to sap AUTO or one of his allies, AUTO or that ally instead cleanses the sap, heals that ally for X amount and gains 25% energy.