I’m making this due to the fact that many new forumers may be spamming without understanding the basic rules of the forum, so here’s a little guide for newcomers to hopefully help them understand the basics! Also if your new and reading this hi! Below will be different rules that you can take a look at to understand some basics before posting or interacting!

Topics are the posts of the forums, there are a variety of different topics in the forums, here’s how to avoid making a topic that is considered spam.

An example of a spam topic:

A topic is meant to obviously be about something, for example it could be a concept, a question or a guide, a topic that has nothing to add to anything or is plain nonsense can be considered spam so if you are gonna make a topic make sure to have an idea and don’t post anything similar to the example also if your topic is probably similar to others probably read others topics to know how format and handle a topic you wanna post and discuss about

If you are gonna post a question or something that could fit as a reply probably try to find a thread where you could have your question or reply noticed, the spam rule should also apply to replies, make sure your reply adds something to the conversation!

Examples of spam in replies:

“I really liked the new episode of spongebob

The discussion is obviously not about spongebob! Here’s a better reply to add to the conversation

“I really liked the new Star Wars movie! How about you guys?”

Let’s say you see an interesting thread, but it’s a couple months old, no one has replied in let’s say 3 months, but you still wanna reply and hopefully get some life in there or just wanna talk! While Necro-posting isn’t a rule it’s still frowned upon by many forumers! So if you wanna reply here’s how to reply without being a spammer!

“Did you guys notice the new hero portrait, who can it be? Let’s discuss!”

“Yeah, I think it looks like the Fairy Grandmother!”

1 year later reply to turtledude
“Aren’t you the guy that made the pencil concept? It was cool lol”

The last reply is obviously not adding anything new or interesting to the conversation and is instead talking about something insanely off-topic, this can be considered a spam reply and a necropost. Not a good thing! Now let’s get a example for a necropost that is okay!

“Did you guys notice the new hero portrait, who can it be? Let’s discuss!”

reply from turtledude
“Yeah, I think it looks like the Fairy Grandmother!”

1 year later reply to turtledude
“I know this is old but the portrait is still there and there’s clues. Now we can see a wand! I think it is fairy godmother!”

The last reply is introducing new info and adding something to the conversation! This can apply to any thread just make the reply interesting a something new to the topic! If people already knew this info don’t worry! You still tried adding something and didn’t spam, you did nothing wrong!

Things between you and another person are getting heated, the argument is starting to become spam and a couple minutes later you both get flagged and lose your regular or become known as spammer, here’s a couple ways to properly handle confrontations and arguments!

First of all I understand that sometimes things can get heated but this can turn into spam so here’s can example of that:

“Which is better Goofy or Mickey?”

“Let’s discuss who is better, don’t take this seriously just a little thread, this can be fun!”

“I think goofy because he can be funny and he’s you know, goofy

“I think Mickey because he is fun and is obviously iconic!”

“But goofy is funnier!”

“But goofy is better! Mickey isn’t!”

Then it goes on and on until you finally ruin the thread and get your selves flagged! If it’s starting to get heated make sure to calm down and pm the other person and continue there and hopefully allow things to get less heated or get to agree with each other on the argument, here’s an example of private messaging someone

(May be different on other devices! 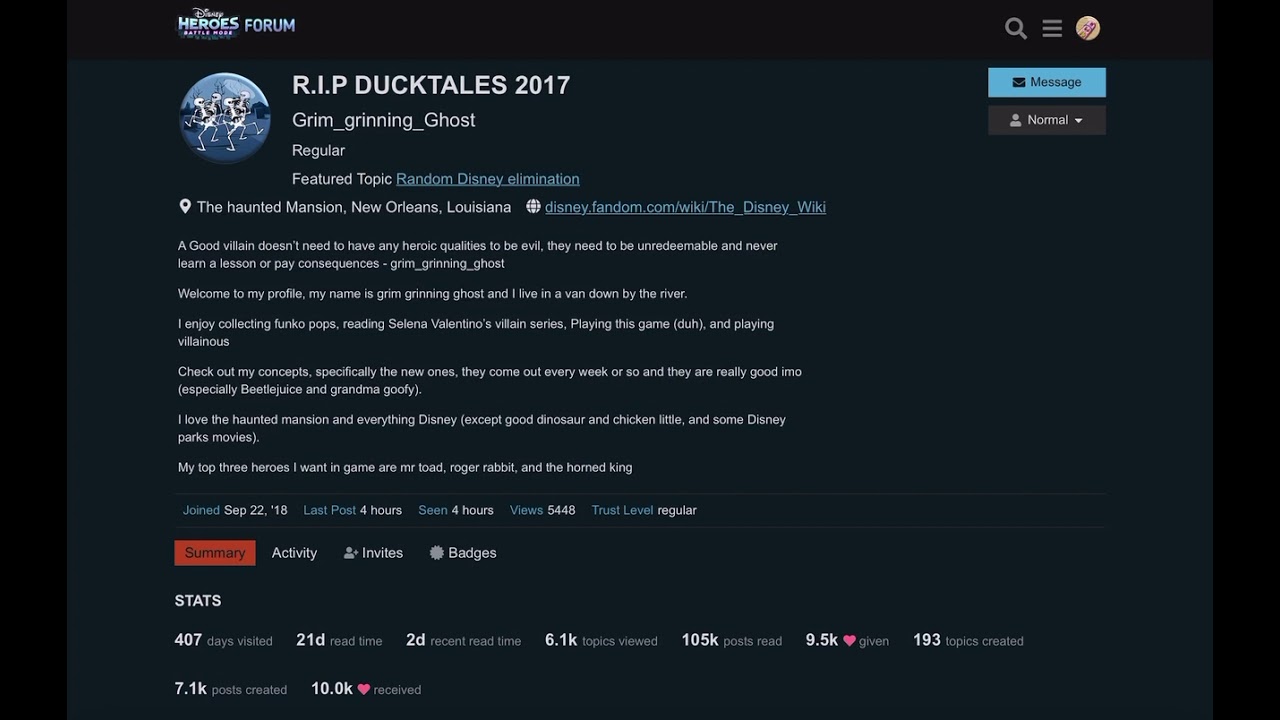 To all who don’t know about flagging here’s a basic look-over, flags is an option that forumers can use to hide offensive, rude, inappropriate or spammy posts. It looks like this:

Now let’s talk about ranks! Here’s a description of each one in the link

You can’t lose any rank except regular, regular trust level can be kind of hard to get but not to hard but it’s pretty easy to lose if you are getting flagged constantly due to spam or inappropriate posts! So all the rules shown to you here are highly encouraged to follow to keep that trust level!

Obviously don’t be rude or mean to anyone in the forums, being disrespectful is not good here, like they if you don’t have anything nice to say just don’t say a thing at all.

Remember to respect others opinions and understand others on personal things so it doesn’t turn into a spammy argument.

Here are some other topics that may help you around the forums and understanding different topics!

Well that’s it for now but this topic will be updated with new info as much as possible to help new users understand some basics around the forum!

Thanks for linking my concept guide! This should be pretty helpful for new members!

This is a fantastic post and guide for all new forumers. I would suggest everyone to bookmark this and refer to it in the future.

It’s a excellent reminder even for older forumers and those that are still relatively recent like myself to be embracing and accepting to those that join. Once again, thank you.

Very nice topic that is usefull to new (and maybe also old) members of the forum.