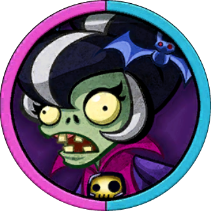 “Hehehehehe! Have I got a trick for you!”

She’s a zombie AND a witch. She will cast a dangerous spell on enemies and cause mayhem on the battlefield with a bag of tricks.

White Skill: Acid Rain (Fantastic Damage)
Immortica conjures a storm of acid rain to pour down on all enemies, dealing X damage to them, removing X reality per second, and blinding them for 9 seconds.

This has a chance to be reduced by 50% if the “Most Wanted” enemy is above level X.

Blue Skill: Evaporate (Normal Damage)
Immortica casts an evaporation spell on the enemy with the most armor, dealing X damage over 12 seconds, removing 50 energy per second, and reducing their basic damage and buff’s strength and duration by 50%.

The basic damage and buff reduction has a chance to fail against enemies above level X.

The scare has a chance to fail against enemies above level X.

Red Skill: Bag Of Tricks
Disabled and debuffed enemies lose X skill power per second while disabled or debuffed, up to a max of X.

Every 4 times Immortica crits an enemy, she applies a random debuff to that enemy for 10 seconds.

Applying a debuff has a chance to fail against enemies above level X.