The following concept is of a character from a cartoon that is NOT FOR KIDS. Continue only if you so wish.

"Ok look, you’re all making this into a WAY bigger deal than it needs to be. I don’t pry into YOUR personal lives." 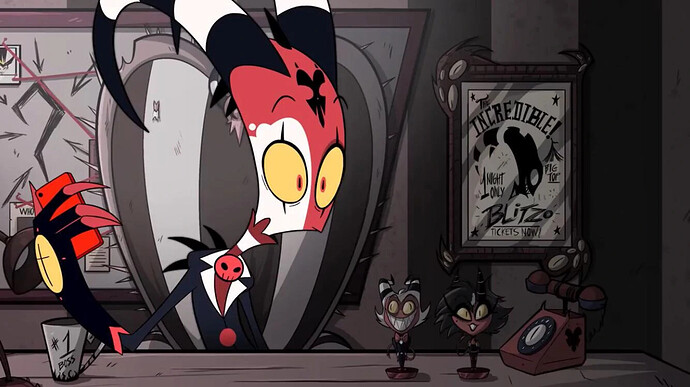 The boss of I.M.P. Headquarters! He will-…wait, is he on the phone? What good is that gonna do in a time like this?!

Active: Blitzo hangs up his phone with a shocked expression on his face, and performs a three part attack.
First, Blitzo snaps his phone in half, giving himself X skill power for the rest of the wave.
Next, he crushes the broken phone with a heavy object, removing X armor and X reality from all enemies.
And last, Blitzo takes out a blender, grinds up the remaining pieces of his phone, and drinks it, healing X HP, and giving himself an X HP shield for 10 seconds.
He pulls out another phone afterwards, continuing the cycle.

When Blitzo is disabled or debuffed, he takes out a gun from under his desk, and shoots the enemy with the highest skill power, dealing X damage, and studying or scaring them for 8 seconds depending on if their armor or reality is highest.

When Blitzo’s HP is at 30% or lower, he will put his feet up on his desk, and lay back, making him invincible until he uses his white skill, or gains all his HP back.
He also gains X tenacity during this phase.

Purple Skill: The O is Silent

Blitzo applies silence to enemies that damage him while he’s under the effect of “Recline a Little”.

Blitzo gains 1 stack of Hardy every time an enemy is silenced.
“Can’t Unhear” gives all allies an X HP shield.
When an enemy reaches 20% HP or lower, Blitzo automatically uses “No Distractions” on them.

Entrance: Walks up to his desk, and sits down, before getting a phone call and answering.

Victory: Jumps up on his desk, and yells in victory.

Defeat: Smashes his phone against his desk with his hand, and then looks down at it in realization.