This is my submission for @Scarlet_Captain’s 2nd Grand Concept contest! Apologies if this doesn’t have skill icons, I do NOT have motivation for that. 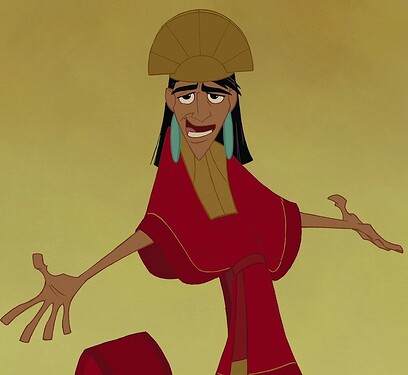 The Emperor of the Sun Kingdom, Kuzco struts onto the battlefield, dancing his way to victory and getting rid of anyone who dares to ruin his groove.

Role: Tank
Position: Front
Trial Team: Yellow
Entrance: Gets carried by his servants on a throne
Victory: Starts to disco dance while a disco balls descends.
Defeat: Gets frustrated and stomps his foot.
Attack: Uses a hair comb to scratch the enemy

White Skill: Beware the Groove (Normal Damage)
Passive: Kuzco receives 50% of the damage he deals back as healing.

Active: Kuzco begins to dance until he runs out of energy, healing himself X HP per second and gains X armor and X reality while he is dancing. If he is knocked back or receives more than 30% of his Max Hp in a single hit, this skill ends. He calls his guards to charge through all enemies, dealing X damage and slightly knocking them back.

Green Skill: No Touchy (Normal Damage)
Every 7 seconds, when an enemy is within melee range of Kuzco, he will get defensive and knocks them back, dealing X damage and applying 2 stacks of “Weakness”.

Enemies with “Weakness” take 10% more damage from all sources per stack and can have up to 5 stacks of “Weakness”.

Blue Skill: Kuzco Motivation
Kuzco spells his name out by posing, granting himself and allies 50% attack speed for 7 seconds and X basic damage for 12 seconds. When an enemy deals critical damage to Kuzco while his attack speed is increased, they will be stunned for 7 seconds.

Purple Skill: All About Me
Every 3 basic attacks, Kuzco steals the longest active buff from the enemy damaged.

Stealing buffs has a chance to fail against enemies above level Z.

Red Skill: Face Of The Nation
Kuzco gains 70 energy whenever he steals a buff from an enemy.

Armor and Reality buffs on Kuzco are 50% stronger and last 75% longer if the source isn’t Kuzco.

The armor and reality buff increase is less effective if the buff came from allies above level X.

Kuzco-Queen Of Hearts
Campaign: Games from the Throne
Kuzco and QoH compete in a royal competition to see who claims the throne.

Games from the Throne

Read this as Game of Thrones

A really good and funny concept. As far as I can see, it matches the character well!

I do have a question though

Why did you decide on 2 effects for the star-side of the disk? I thought only one was more common?

Why did you decide on 2 effects for the star-side of the disk? I thought only one was more common?

QoH Disk: Since it’s about gaining shields when evading a disable, I thought giving extra evasion would be helpful.

Kuzco-Queen Of Hearts
Campaign: Games from the Throne
Kuzco and QoH compete in a royal competition to see who claims the throne.

Interesting friendships,but why Powerline? Also I am surprised Kronk isn’t a friendship,but So I is a very unique friendship,I never see anyone use her as a friendship.

The Powerline friendship is very cool though.