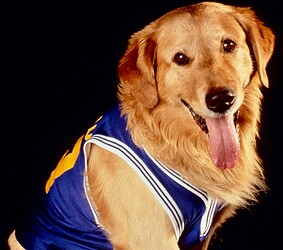 The court has found a new player! While his skills are normally limited to basketball, Buddy can surely lend said skills to the City battlefields!
Trial Team: Red
Role: Midline Damage
Stars:

Skills:
Basic Attack: Buddy shoots his ball at enemies with his mouth. For each skill, the ball returns to Buddy and grants him X HP.

White Skill - Golden Shooter - True Damage
Buddy does tricks to inspire his allies for 8 seconds, then launches his ball at the strongest enemy, dealing X damage and slowing their attack speed by 45% for 6 seconds with his slobber.

Green Skill - Shooting Hoops
A basketball hoop materializes above the enemy lineup. Buddy sends the ball bouncing off of each enemy, dealing X damage and removing X reality. The ball flies into the hoop, giving X reality to each of his allies.

Blue Skill - Old Dog, New Tricks
Buddy shoots the ball up into the air and sends it hitting the frontmost enemy with his tail, dealing X damage.

Purple Skill - Team Player
Each time Buddy performs his “Golden Shooter” skill, he grants himself and his allies X HP and X energy. His armor and max HP are increased to X.

Red Skill - Get the Ball
Each time an enemy is hit by Buddy’s ball, regardless of the skill performed, their attack speed is slowed by an additional 20%.

Buddy + Agent P
Campaign: Order on the Court - Agent P takes notice of Buddy’s basketball talent, and sees much more in the mutt and offers to have him join the OWCA. While Buddy is interested in making friends with the platypus, he has no interest in joining such a sophisticated agency.
Disk: Animals!
Disk Memory: Buddy takes 60% less damage from enemies 7 seconds after performing his “Golden Shooter” skill.
Disk Power: Z reality, Z evasion
Allies: Gadget, Robin Hood, Chief Bogo