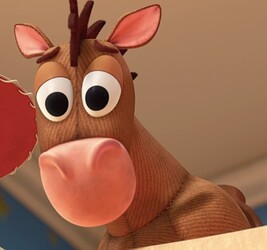 In every roundup, there must be a loyal and trusty steed, and Bullseye fits the bill! Galloping through creeps and soaring into people’s hearts, there is no limit to what Bullseye will do for his friends.
Trial Team: Blue
Role: Frontline Tank
Stars:

Quote: Bullseye does not speak.

Animations:
Entrance: A cardboard box filled with packing peanuts appears in the battlefield, and Bullseye bursts out of it excitedly.
Victory: Bullseye stands on his hind legs, rearing valiantly.
KO: Bullseye puts his head down in shame.

White Skill - Finest Hour - Normal Damage
Bullseye leaps over the enemy lineup, distracting them for 6 seconds. While distracted, they take X additional damage and will not perform any skills.

Blue Skill - Letter Shuffle
Bullseye sits down and shows Bonnie’s name written on the bottoms of his hooves. He then shuffles them around, removing X reality from the midmost enemy.

Purple Skill - Giddy-Up!
Each time Bullseye performs his “Finest Hour” skill, the targeted enemy is stunned for 9 seconds and loses X energy. His max HP is increased to X.

Bullseye + Buzz Lightyear
Campaign: Horsing Around - Bullseye and Buzz haven’t been paired up since they’ve chased down a moving plane. That changes once Bullseye reunites with him after being pursued by creeps. He and Buzz proceed to search for the rest of the gang to bring Bullseye to safety.
Disk: Space Rancher
Disk Memory: Each time Bullseye reaches 50% his max HP, he becomes immune to debuffs.
Disk Power: Z Basic Skill power
Allies: Maleficent, Phil, Go Go

Wow this is pretty good since how little Bullseye has to work with. Good job

Nice concept, but there’s something that’s kinda bugging me.

Merlin is in the concept with Bullseye.
Merlin has enough friends he has with him. Overall, great concept.