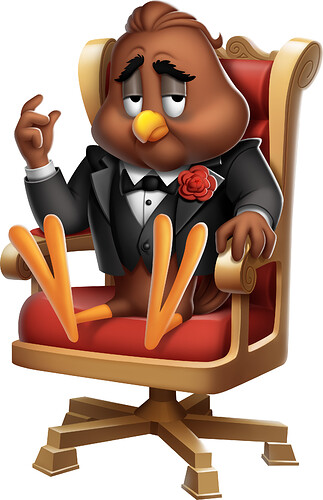 “Keep me safe and I might a little something for ya!”

Entrance: Henery appears sitting in his chair then he stands up ready to fight

Victory: Henery savors the victory by smiling and nodding his head

Defeat: Henery tries to shoot his Tommy gun but he gets knocked back and sits up with a dazed look

Don Henery throws a picture at the enemy with the highest HP then he throws a knife at the picture which then the knife hits the enemy, dealing X damage to the enemy and halving the max HP of that enemy.

Blue: Part of the family

Don Henery now heals the frontmost ally overtime and gives that ally a shield for X amount. If the ally is a tank ally, their shield cleanses 1 debuff off of them every 5 seconds.

Whenever the shield gets destroyed, Don Henery and the frontmost ally become immune to crits and knockbacks for 10 seconds.

This activates every 8 seconds before this move has to cooldown.

“Take em out” now decreases the crit power and crit chance of the target enemy by 100% for 10 seconds.

For each ally that hasn’t been defeated in the battlefield, Don Henery heals himself and the frontmost ally for 35% of his max HP per each undefeated ally every 5 seconds.

“Bada boom” now has a 50% chance to crit if the target enemy is the enemy that has a “bounty” on them, if this skill crits against the enemy with the “bounty” on them, the enemy is damaged overtime for X amount per second and has the duration of 2 of their buffs halved.
+X skill power
+X critical damage
+X max HP

Don Henery/Mr. Big and Koslov
In the family
crit chance against disabled enemies

Don Henery and his allies now has their crit chance increased by 35% against disabled enemies.

“Part of the family” now instantly activates
When the frontmost ally is under 25% of his max HP.

I got that character and max rank him in looney tunes world of mayhem!

I got the Capo Dei Capi like, 7.7 stars in looney tunes world of mayhem thanks to a glitch