Captain of the undead (unlikely concept)

another plants vs zombies concept is here!! But this time…i decided to focus on the shooter games from the series…starting with a crusty-old pirate captain. Enjoy!! 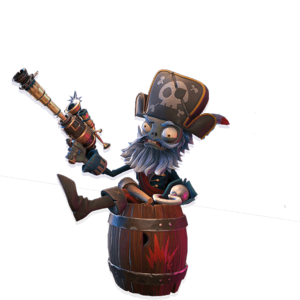 a dreaded pirate captain with a parrot to match, this salty zombie demands respect with his dangerous weaponry and protective barrel

Entrance: captain deadbeard appears sitting on a barrel then he jumps off the barrel and pulls out his scurvy scattershot

Victory: captain deadbeard laughs like a pirate as his parrot pal lands on his shoulder

Defeat: deadbeards head falls off as he then falls to the ground

Captain deadbeard hides inside a barrel with a fuse on the top which shields him for x amount until his energy runs out or the barrel gets destroyed.

Deadbeard aims at the backmost enemy and then shoots that enemy with his spyglass shot, dealing x damage to that enemy as well as x additional damage for every debuff that the target enemy has been inflicted with.

“Spyglass shot” now studies the target enemy for 8 seconds while also preventing the enemy from gaining any buffs for 8 seconds.

Any projectiles that hits captain deadbeard while “barrel blast” is activated will now reflect back to the enemy who shot or throwed the projectiles, the reflected projectiles deals 2x the original damage that the attack dealt in the first place.
+X max HP
+X damage to “barrel blast”
+X shield health

Captain deadbeard/Davy jones
Cursed by sea
immune to being cursed

Captain deadbeard and his allies are now immune to being cursed when they gain a shield of any kind.

All shields done to allies when captain deadbeard is on the field now have x more health to them.

Good concept. Never expected him to be a tank.

Also, is this made because of BFN dying?