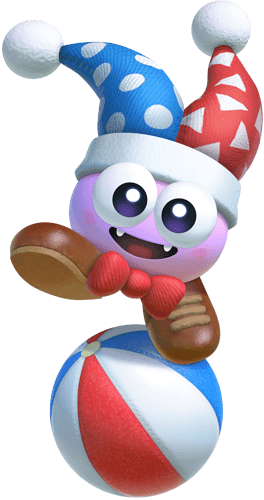 Entrance: marx rolls into the battlefield on his beach ball then he hops off the ball as it dissapears

Defeat: marx gets knocked back as he then lands on his face

True form: marx explodes multiple times before exploding one last time and falling to the ground on his face

Active: marx consumes his stack of “nova” and transforms into his form from kirby star allies, increasing his skill power by X amount, making him immune to debuffs/disables while transformed and scaring all enemies for 10 seconds. 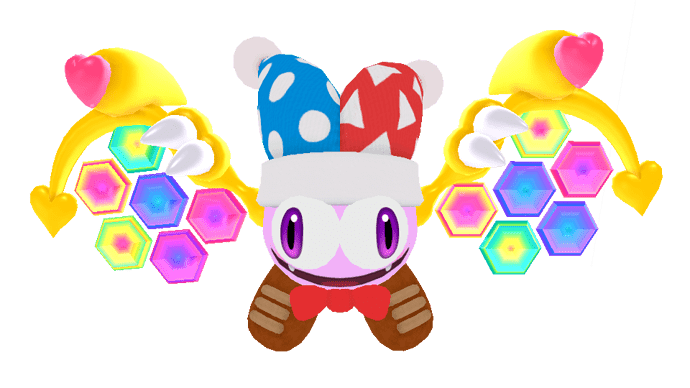 If marx is already in his winged form when he activates his white skill again, marx will instead split himself into two halfs and creates a black hole in the middle of the enemy team, dealing X damage to all foes, purging up to 3 buffs from each enemy and decreasing each enemies reality by 52%

Marx kicks a jester ball with more force at the nearest enemy, dealing X damage, knocking the enemy back and making that enemy unable to gain buffs for 5 seconds.

In his winged form, marx will instead drop several small seeds in the enemy team which then the seeds will immediately sprout up into sharp green vines, each vine deals X damage to the foe caught in the vines hitbox while also stunning them for 10 seconds and rendering them unable to gain buffs while they are stunned for those same 10 seconds.

Marx’s eyes go pitch black as several black eyeballs fall out and bounce towards the enemy team, dealing X damage to each enemy, decreasing their reality by 25% per each hit and scaring all enemies for 10 seconds.

Whenever marx is hit by a disable while in his winged form, the enemy who dealt the disable has the disable reflected back to them with it’s duration refreshed.

Marx heals himself for X amount every 10 seconds, each time he heals, he gains X reality and also gains 100% attack speed for 10 seconds.

Marx now takes 35% less damage from the enemy who deals the most damage to him during the course of the battle.