Creed Bratton Concept [The Office US] 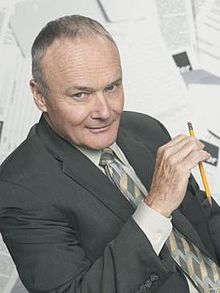 Creed Bratton won’t take no for an answer when it comes to fighting creeps.

“No one steals from Creed Bratton and gets away with it. The last person to do this disappeared. His name, Creed Bratton.”

Entrance: Walks in counting money which he quickly hides

Victory: Flicks through a wad of money

Defeat: Screams at the enemy team

Fantastic Damage
Creed runs up to and hits the furthest enemy dealing X damage. He then screams and runs back silencing nearby enemies for 8 seconds.

Green Skill: Four-Toed Foot
Creed shows the enemy team his four-toed foot scaring them for 11 seconds.
The scare has a chance to fail on enemies above level X.

Fantastic Damage
Creed pulls out some mung beans to eat causing the smell to waft through the enemy team dealing X damage per second.

Purple Skill: Quabity Assuance
Enemies damaged by Mung Beans have their attack speed reduced by 40% for 7 seconds.
The slow has a chance to fail against enemies above level X.

Vote for the next Office character here.

No, but you can vote for the next character.