Ayy, it’s the magical concept creator, Tragic Magic, back here again with another cookie run concept! Roguefort was a test run, and y’all seemed to like it, so here we go! Two concepts in one! This time featuring the technology themed Cookies! 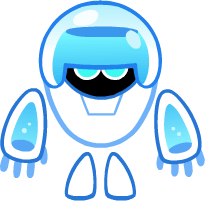 Cutting Edge Technology at its finest! Ion cookie robot advances in tiers to protect their allies and follow their protocol.

Ion Cookie Robot remains in tiers between waves of a fight. Ion also heals himself for X hp every time they use their active.

(Sorry, I couldn’t get images for what the tiers look like. It happens!)

Ion can use this every 10 seconds. 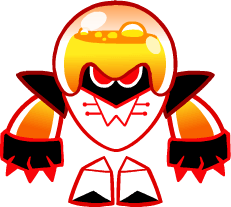 When Ion is demoted to tier 1, allies receive his Max HP boosts as healing. 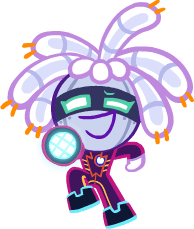 “The age of cyborg is here!”

Flowed with vengeance and electricity, Cyborg cookie stuns and shocks enemies with her electric based attacks.

White Skill: High Voltage Flight (Fantastic Damage)
Cyborg activates high voltage flight mode while two electro vortexes appear at the sides of the screen. She flies through them 5 times, dealing X damage to enemies hit and knocking them back. If enemies were sucked into the electric vortex, they are sent to the other side and are stunned for 10 seconds. This deals 10% more damage per buff on enemies.

Green Skill: Gigawatt Shield (Fantastic Damage)
Cyborg blocks an attack that deals fantastic damage, granting her a shield that has X HP and shocks nearby enemies, dealing X damage and stunning them for 6 seconds. Cyborg also gains the damage dealt by this skill as healing.

Cyborg can use this once every 8 seconds.

Blue Skill: Charged Energy (Fantastic Damage)
Cyborg fires they energy cannon when “High Voltage Flight” ends, dealing X damage to all enemies and removing 50% of their energy. If enemies were above 500 energy, they are stunned for 7 seconds.

Red Skill: Fully Charged
If Cyborg were to Crit a stunned enemy, she would super Crit instead.

Cyborg gains X skill power each time she stuns an enemy, up to a max of X. This is reduced by 50% when carried from wave to wave.

Gaining skill power from stunned enemies is reduced against enemies above level X.

I had plans for another cookie run character in this topic, but because they were an NPC, it would be hard to find enough sources to create a concept for them. But still, I managed to complete cyborg and ions! Hope you enjoyed, and I’m happy to make more even if it pleases one Forumer. See you next time!

How would you rate Ion’s concept?

How would you rate Cyborg’s concept?

Any Feedback on my concepts?