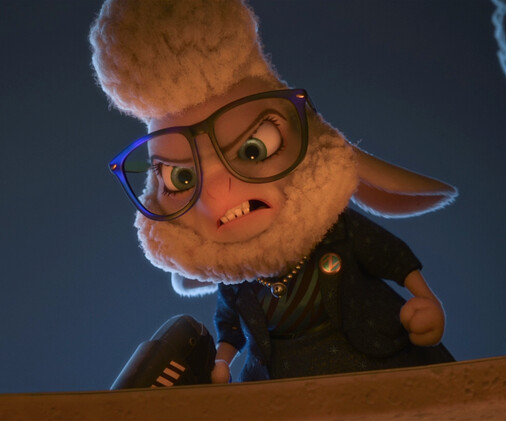 Quote: “Fear always works, and I’ll dart every predator in Zootopia to keep it that way.”

Animations:
Entrance: Bellwether loads her serum gun as she enters the battlefield.
Victory: Bellwether reveals an evil grin as she adjusts her glasses.
KO: Bellwether mumbles in disappointment.

Green Skill - Battering Ram
Bellwether orders a ram to charge at enemies, dealing X damage and stealing X HP to give to Bellwether.

Blue Skill - Jam Cam
Bellwether opens her laptop, using a traffic camera to study the two enemies with the most HP for 9 seconds.

Purple Skill - Savage Empire
If the enemy charmed by Bellwether’s “Savage World” skill reaches 0HP before the full 8 seconds, the skill’s effects will be transferred to Bellwether.

Red Skill - Unstoppable
Each time Bellwether uses her “Battering Ram” skill, the ram will also stun the weakest enemy for 6 seconds. Bellwether’s attack speed is increased by 60%, and her max HP is increased by 30%.

I know I’m getting a little keyboard-happy with these concepts, but with all due respect, it’s something I like to do and nothing more. I’m not trying to flood the forums and drive them into being official…

What happens is that less than a day ago you got 2 concepts, (MO and Tarzan) and now you got another concept, And the fact of creating several topics in less of one day can be considered Spam, so it is advisable to create a topic / concept at least once every 2 or 3 days (maybe a week, maybe) in part so as not to spam and polish the concepts to improve them

Just as I am saying, do not take away your motivations to create a concept, just take your time creating the concepts and take advantage of that time so that they are better.

(By the way, I forgot to let you know that I’m using google translator, so if I said something wrong, sorry)

This is spammy but I’ll review it.

This seems very weak maybe try to increase the time of the charm to like 10 or something, and the damage increase needs to be a variable.

Blue Skill - Jam Cam
Bellwether opens her laptop, using a traffic camera to study the two enemies with the most HP for 3 seconds.

This is also insanely weak, maybe increase them time of the study?

Purple Skill - Savage Empire
If the enemy Bellwether uses her “Savage World” skill on reaches 0HP before the 8 seconds are over, Bellwether will deal 2.5 times more damage with her basic skill herself for 5 seconds

Very weak and kind of hard to understand, also the damage needs to be a variable. Maybe try to make it a different effect like she gains increased skill power or something, it would make more sense and be less weaker.

Insanely lacking for a red skill, stun is way to short maybe make it 10 seconds or more?? Maybe increase the attack speed percentage as well, also does it stack? Instead of HP count you should just say that her Max HP is increased.

Overall her kit is insanely weak and it all seems quite rushed, I suggest taking some time to read other concepts and skills in-game to try to apply to your future concepts.

I can see how easily confused you got, so I’ll break it down for you.

In the film, anyone savage would target the good guys, or in this case, the player’s lineup. If Bellwether turned an enemy savage, it would be ideal to charm them and have them target other enemies. If Bellwether has the skill’s effects transferred to her, she would still target enemies.

Also, I just leave it to the devs to apply fail chances.

That would be pretty tedious to assign and animate different basic attacks to savage enemies, though, especially given the amount of characters and creeps already in the game.