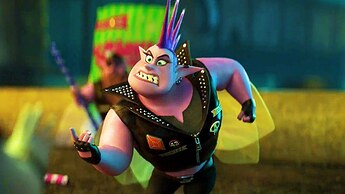 Blue Skill - Nice to Drop By
Dewdrop and her Pixie Dusters use their wings to carry their motorcycle over the enemy lineup and drop it on top of them, dealing X damage to them and removing X armor from them.

After they drop the motorcycle, it will disappear and reappear to the position they originally were before performing this skill.

Purple Skill - You Got a Problem?
Dewdrop and her Pixie Dusters are immune to disables after reaching 50% of their max HP. Their Green Skill power is increased to X.

I see what you mean, but I’m sure there are several other heroes in the game that also fall under that category, like Finnick and King Triton to name a few.

There was no real villain, unless you count the dragon, but that only appeared for like 6 minutes

Pretty sure there was a big villian in Onward

Forgot what they tried to do though

Honestly, I just threw these guys in for the heck of it, much like everyone else in the Hero Concepts page, so it shouldn’t really be a big deal.

who was it? some unnamed sand villain?

i do agree, it was pretty green and big, and it could just melt your hand off