Diary of a Wimpy Hero 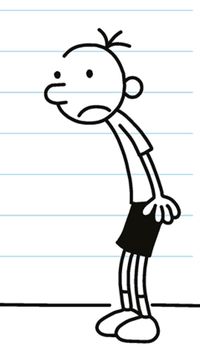 “I’ll be rich and famous one day. For now I’m stuck in middle school with a bunch of morons.”

To him, his journal is an autobiography, not a diary. He hopes to be rich and famous some day, so he uses what he has right now to help deal damage to enemies.

Role: Damage
Position: Middle
Trial Team: Yellow
Entrance: Walks in and gets his journal out of his back pack (changes with blue skill)
Victory: Puts on some shades
Defeat: Throws his book down and face palms
Attack: Jabs enemies with his pencil

White Skill: Cheese Touch (TRUE Damage)
Greg applies the cheese touch to the “Most Wanted” enemy, dealing Z damage, bonus damage equal to 200% of Greg’s skill power over 5 seconds, and placing them under “Quarantine” for 12 seconds. The enemy under “Quarantine” will have all buffs blocked from them and debuffs against them will last 100% longer. This cannot be dodged by any source.

True Damage ignores armor and reality. The bonus damage is reduced against enemies above level Z.

Blue Skill: Body Blankie (Normal Damage)
Greg now enters combat wearing a body blankie, granting himself X armor. While in this body blankie he will get sweaty, reducing his attack and movement speed by 25% but making him immune to all slows. When he reaches 50% of his Max HP, it comes off and releases his smells, dealing Y damage over 5 seconds to enemies in front of him.

The damage is reduced against enemies above level Z.

Red Skill: Rich And Famous
Each time an ally gets buffed, Greg gains Z skill power. This buff is carried from wave to wave.

Greg receives all buffs blocked from “Quarantine” and “Fatigue”. Up to 3 buffs can be gained this way once every 8 seconds. Greg gains 8 Armor Negation for every other buff he has.

Thanks for the feedback!

No problem, keep up the great work!

I just hope others will get to see it.

With such a great concept, how would people not see?

Its not from an extremely goofy movie sadly. It’s a character from a source you may or may not be familiar with…

this is really good! keep at it cause ur concepts are fun to see!

haha. i am a girl lol

Apologies for the revive, but this concept got a refresh. Posted it here to take up less space.

So what I did:

Added “Quarantine” effect to white, credit to @Imagineer_V for making the original idea.

Thanks for the credit.

I love this concept and i love the movie good job