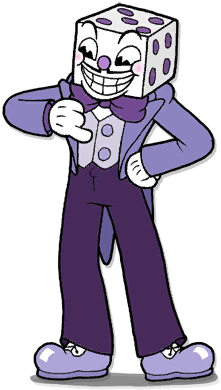 The gamest in the land struts into the battlefield ready to play a little game along with his demented minions.

Entrance: King dice appears from a hole in the ground and winks at the enemy team

Victory: King dice laughs while his head bounces up and down off his shoulders

Defeat: King dice gains bruises on his face as he falls on his knees

Basic attack: King dice shakes his fists together and then tosses a dice towards the nearest enemy, dealing X damage.

1 (Phear lap): Phear lap throws a blue gift box at the enemy with the highest attack speed, dealing X true damage and inflicting “Shattered” onto the enemy as well, then phear lap gallops through the enemy team, dealing X damage to each enemy he passes through and knocking them back

2 (Mr. Wheezy): Mr. Wheezy appears and shoots a single fireball at the enemy with the highest armor/reality, dealing X damage overtime for 7 seconds and inflicting 2 stacks of fatigue on the enemy

If an enemy has more than 9 buffs on them, King dice bursts out in laughter and somehow resets the enemy so that they lose all their buffs.

Each buff that is removed by this move now drains 25% energy from the enemy as well.

Purple: So clever, so dapper

“Card brigade” now decreases the cooldown of itself by 40% whenever it charms an enemy.

Red: Bring them to the king

Each disable on the enemy team now deals X fantastic damage to all enemies with disables on them.

Disables on enemies now have a 50% chance to last for 5 more seconds if the disable was already inflicted to the same enemy.
+X power to “Card brigade”
+X skill power
+X normal crit

Disables now lowers the amount of a random stat by X amount on the disabled enemy.