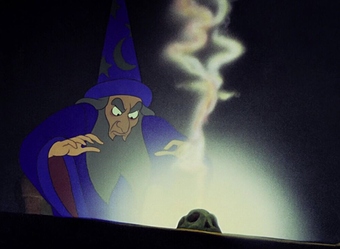 Quote: “A long time ago on a very peculiar day, my mirror lured someone out of his bed and opened a doorway to my workshop. I do not know if the mirror was being mischievous or malicious. Perhaps it knew that the curious intruder had a role to play in my project.”

Description: Yen Sid uses his mighty magic to bring in damage and terror to the enemies.

Basic Attack: Yen will slap the enemy with his broomstick.

Victory: He will create a mystic cloud shaped like a butterfly from his skull.

Defeat: Yen Sid will fold his arms, glaring madly at the enemies.

Fantastic Damage
He will call out the walking brooms to go after the enemies (If Mickey make the brooms alive with the sorcerer hat, so can Yen Sid). The brooms will deal knockback and X damage to enemies as they pass by.

Green Skill: Mystic Clouds
Yen Sid will get out a skull to create a mystic cloud that shapes like a bat to scaring and blinding enemies for X seconds.

Fantastic Damage
Yen Sid will create a huge wave at the enemies that will deal knockback and X damage to the enemies. This will also decrease the enemies’ attack speed by X% for X seconds.

Purple Skill: Magic of the Sorcerer
“Mystic Clouds” will also steal X energy from enemies and Yen Sid grants himself X Skill Power for the rest of the wave.

Sorry I couldn’t find any quotes for Yen Sid because he never talks in Fantasia, but that quote is from Epic Mickey. Yen Sid might be unlikely, but I hope he will come soon! Do you have any feedback that I could edit?

Oh wow, I didn’t know a character like him existed until now.

Quote: whatever you do, Mickey. Don’t mess with my hat while I’m gone. Yes,I made that up

Maybe you can try his quotes from Kingdom hearts. He after all, is the mentor of king mickey in there.

He talks abunch in Epic Mickey because he the narrator

I like the idea of him as a character, but not the skillset. It’s better than most, but it’s just a bunch of disables, with nothing really new. Mal and Tia both do that already. I think there’s a more creative way to utilize what’s here, especially the brooms.

I think he does in the game kingdom hearts III

I agree. And also since Yen Sid is literally the mentor of King Mickey throughout Kingdom hearts, all the games. He can also be considered a true master of magic and wisdom.

He will be a great addition to the game. Plus, I just love the retro characters especially the ones from the 1930’s and 1940’s era.

He does speak in the Kingdom Hearts games so, you could always use a quote from them, provided that you played them before.

He’s truly a gift from our predecessors. I hope Disney makes a movie about him soon.

Most people don’t know about fantasia or Steam Boat Pete. Or the origins of Walt Disney WITH mickey Mouse. Or any of the golden oldies.

I hope they truly release him soon:)

I thought he was going to be red(because of Mickey)