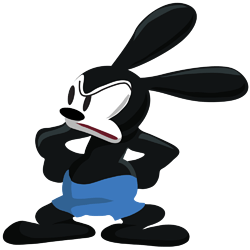 Quote: “It was kind of a budget issue.”

Description: Oswald the Lucky Rabbit cause some trouble and chaos as he fights against his foes in the battlefield.

Basic Attack: Oswald gets out his gun, hitting the enemy with the cap instead of a bullet.

Entrance: Oswald flies down, using his ears as propellers, and gets to position.

Defeat: Oswald plays his accordion, but it splashs water in his face.

Fantastic Damage
Oswald will get his ears out of his head and continuously whack the enemy with his ears till he runs out of energy of when the enemy is KOed, dealing X damage per second. Oswald then puts his ears back in his head afterwards.

Fantastic Damage
Oswald gets out is ink can and splats the closest enemy with ink, dealing X damage and blinding that enemy for X seconds.

Fantastic Damage
Oswald gets out his remote to zap the enemy with the most energy, dealing X damage and sapping that enemy for X seconds.

Purple Skill: Lucky Rabbit
“Electric Shot” will also stack 2 stacks of “Hardy” on Oswald. He gains X Skill Power for each stack of “Hardy” gained. Each stack of hardy blocks a debuff from being applied to the affected and is then removed.

This skill has a chance to fail if Oswald is above level Z.

Any feedback? And I hope you liked it!

Reworks: I have reworked a few of my old concepts like adding red skills, skill icons, and updating friendships. Check them out by tapping/clicking their images.

And also check these out:

I wonder if His kit would be better if we based it off of the Epic Mickey version of Oswald. I mean it would add Charm.

Well, the blue skill and is quote are based off Epic Mickey. But I also wanted to put is classic moves in too.