I did this in my opinion quiz but then i realize this is too big for my quiz. So, i have made this into it’s thread.

Here’s how this will work. You pick any disney character (Muppets, Marvel, and Star Wars can be included) and you tell it’s special moves and Final Smash like you would see them in Nintendo’s smash (rimshot) hit: Super Smash Brothers.

I look foward in what you create

(Note: please try to reframe from using Sora. I am aiming for movies and television and Sora is of video game origin.)

Hmmmm, Ok I guess but 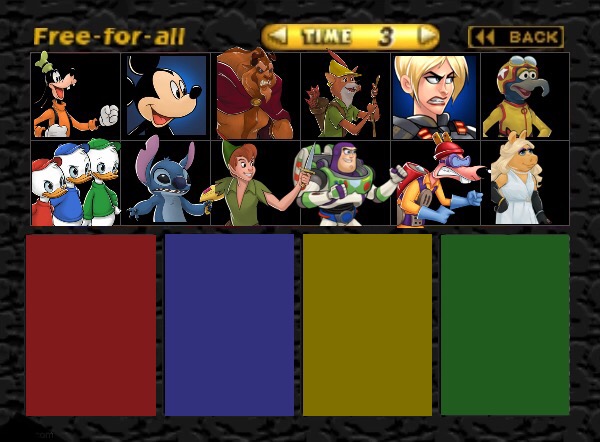 This would be the Original Roster lol

This is gonna be interesting but I’ll try one.
Fighter: Jessie

Neutral Special: She does multiple kicks to an enemy in front of her and this will heal her too. Each kick will do even more damage and healing.

Side Special: She rides on bullseye to make a quick trip across the stage, she can use this to trample enemies in her way. This move has invincibility.

Up Special: She jumps up high in the air, then she’ll fall down and smash into enemies underneath her, the sound waves caused by the smash causes nearby enemies to trip. Or you can prevent her from falling to recover if she’s off the ledge.

Down Special: Jessie charges her sonic yodel. You can hold on to the charge when it’s maxed out to use later. When you release it she will yodel the area around her which causes enemies within range to take damage and get stunned. The longer you charge the move will have more range, enemies will be stunned longer and take more damage.

Final Smash: Jessie says “Yee-haw!!!” and lassos a random enemy from the stage. The enemy will be tied up in a box filled with abandoned toys and be placed on a train that will fall off a cliff and explode.

Jessie takes advantage of her tripping and stunning skills to use her neutral special on her opponents. She has plenty of ways of dodging and staying healthy. You wanna take advantage of her yodel special and charge it whenever you get the chance.

I originally thought they would put Wreck it Ralph in Smash 4 because of the movie and I casted him as my vote in the fighter ballot way back then lol.

Neutral Special - Wreck It: Ralph smashes the ground in front of him with both hands like he does in DH:BM. But here a wave of rubble is created that travels across the ground dealing significant knockback to buried opponents.

Side Special - Coming through!: A running shoulder bash with super armor.

Up Special - Double-handed Dunk: Ralph extends his huge arms over his head like he’s about to dunk a basketball, making it a bit easier to grab the ledge. If he hits a fighter with this move, Ralph will grab them and throw them straight down. Ralph won’t be put in a helpless state in the air, but he can only use it once in the air. It gets about the same vertical height as Yoshi’s up special.

Down Special - Pothole: Ralph smashes a hole the ground. If a fighter walks over it they’ll be buried like the pitfall trap item. He can only put one out at a time and it disappears after a while. Remember that buried opponents are launched farther by Ralph’s neutral special.

Final Smash - No one I’d rather be than Me: Ralph does a wild full power uppercut. Opponents caught in it are launched above the Mentos volcano in Vanellope’s game, Sugar Rush. Ralph then ascends from the sky and hits them with a heroic punch into the volcano causing a massive soda explosion.

My version Ralph’s a heavy hitter that can set pitfall traps with his down special and then use his neutral special to KO them extremely early. His up special is a aerial command grab which could be fun. And side special is your get out of jail free card.

Scrooge charges up his throw and then he throws a coin at his enemies, dealing a tiny amount of damage…but he can charge it up and when he is fully charged, he throws a sack of coins towards enemies which deals alot of damage and causes huge knockback.

scrooge bounces off his cane to grab a ledge

Scrooge gets out the way as a bunch of coins rain down from the sky, each coin deals medium damage and sack of coins can also fall out of the sky which deals huge damage

Side Special: Pounce: Lunges a great distane causing a knockback

Up Special: World Record Bounce: bounces as high he can to return to the stage

Final Smash: Whoop-de Dooper Bounce: Tigger pounces, opponents that get caught are whisked into the hundred acre wood. Tigger revs up for the Whoop-De-Dooper-Loopty-Looper-Ally-Ooper Bounce and unleashes a flurries of blows until Tigger bounces off his opponents doing major damage.

Did you compare the characters from the original Smash Bros?

No and yes. However, I am doing it on who I think would be included. Half of it being to this game and, if Disney did make a game, on who Disney would put.

With some secondary non-Disney characters in the mix

Haven’t played much Smash bros, but we will see what I can manage.

Neutral Special: Whacks enemy with a newspaper, damage is doubled per whack Edna uses while not moving from that spot.

Side Special: Uses her chair from that movie scene with Elastigirl and slides across arena, pushing all enemies in the way along with her.

Up Special: Her chair shoots out a flame, propelling her into the air. The flames spread and deal damage over time to enemies hit. If used on while on a platform, it leaves a fire there for a few seconds.

Down Special: Edna types on a tablet, a machine gone pops up from the back of the chair and fires bullets for how long she had the skill charging.

If it charged all the way, the machine gun shoots a grenade after it finishes shooting.

Final Smash: Edna Mode captures as many enemies in a glass box as she can. Then she presses a button on her tablet and flames light up the box, and Edna Mode’s glasses. After this, the glass blows up dealing extra damage. I

Not sure how I did, perhaps someone else would do a better job…

If it were up to me the starting roster would be the following.

What would you choose as unlockable characters

For my unlockables i would choose:

These are not Disney…