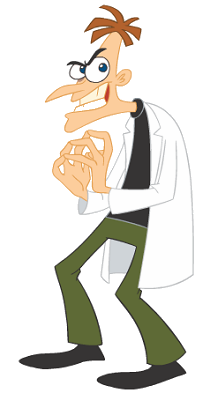 Quote: “It all began on the day of my actual birth, both of my parents failed to show up.”
Position: Backline
Role: Control
Team: Blue
Entrance: Doof flies in on an out of control Leafblower-inator and faceplants before standing up and dusting himself off
Victory: Doof shrugs and starts to laugh
Defeat: A raccoon jumps from the sky and knocks Doof over
Basic attack: See Passive

Active: Doof puts a cloth over his hunk of metal from his wrench and pulls it off again, turning it into an Inator. The Inator shoots an the farthest and closest enemy, splicing their DNA which switches their position and equalizes their health. If either enemy was below 25% of their Max HP when this Skill was activated, they are instantly KO’ed instead.
This bypasses Berserk and Invincible
The instant KO has a chance to fail against enemies higher than level X

At the start of each wave, Doof places a red laser at a random spot on the battlefield. If an enemy steps on the red dot, they are trapped, stunning them until they run out of energy and dealing X damage per second while they try to escape.

Blue Skill: Have At You!

Once per wave, when Doof reaches 50% of his Max HP, he runs at enemies with his wrench, hitting the closest enemy and dealing X damage.
Doof stays in melee range for the rest of the wave.
If Doof activates his White Skill while in Melee range, he runs back to his Inator and uses it, staying back there until he goes below 50% HP again, which activates this Skill.

- Passive Skill
When an enemy is dealt True Damage, they lose 10% of their max armor and reality. This can stack up to 5 times.
This has a chance to fail against enemies higher than level X

Doofenshmirtz is immune to all slows and knockback

When an enemy tries to slow or knockback Doof, he gains a shield for 50% of his maximum health

“Have At You!” Stuns the enemy for 2 extra seconds per star
+Damage from “Have At You!”
Allies: Anger, Yoda, Randall

Phineas & Ferb are next!

This is a good concept.

This is way to high. It usually is when the enemy reaches X HP instead.

This bypasses Berserk and Invincible

This makes the skill way to OP.

When an enemy is dealt True Damage, they lose 10% of their max armor and reality. This can stack up to 5 times.

The percentage is too high and OP.

The Queen Of Hearts’ blue skill has a percentage instant KO and it bypasses berserk and invincible. The armor is a bit op though